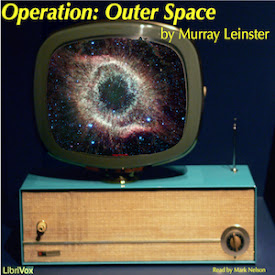 Jed Cochrane is about to take off on man's first interstellar voyage. His mission: Make sure it's good television! (Introduction by Mark Nelson) (6 hr 47 min)

I thoroughly enjoy these old classics. The characters kept me laughing. What happens when you make a commercial enterprise out of space exploration? What happens when the advertisers run the project? The science may be a bit fuzzy, but the vision of how advertisers would be in the control seat was visionary. As usual, the reader was excellent. I look for his name when choosing a book to listen to.

Well read. Fun story of space travel and the discovery of various styles of planets on the first break through light speed and faster travels with romance and interesting point of view of the commercialization of interstellar travel and the philosophy of various planetary types for exploitation and colonizing. Good wrap up and plot conclusion. Thanks!

One of the best sci-fi books on librivox

So much more than a rocket story, and so advanced for its time. Despite all the old sexism and silly technology from a book of this era, the author investigates a number of deeper issues; over population, class divides, economics, and the way our lives are dominated by marketing.

great spoof of advertising and government

....as well as the inherent corruption in science. Excellent social sartire. I do hate these sociopaths who drive the plot though.

excellent work by the narrator. A good old entertaining book

Okay, not up to typical Leinster standards

I recently "found" Murray Leinster and I've been going through his library at a pretty good pace now thanks to the wonderful LibriVox readings by Mark Nelson. Unfortunately, even though I would wholeheartedly recommend most of the Murray Leinster stories I've had the pleasure of listening to lately, I just can't recommend this story. It is just missing the spark of his other stories. I think he tried to do too much with this one. There is a lot of jumping around and the pace is just insane. The characters don't resonate. Cochrane is really hard to pin down. At one point in the story a relationship develops you there is some dialog about him softening and taking time to notice the scenery and his fiancÃ©e. Then he spends the rest of the book directing this and that and making high power marketing deals on the phone. Not another mention of his relationship. Also, who would allow a maniac with elephant guns on the first space flight? I love Murray Leinster but I think he bit off more than he could chew or perhaps he didn't have a clear vision of what he wanted to achieve with this story. Most Lester stories pose a situation or problem that force the protagonist to really think outside of the box with all of the scientific knowledge they have. The problem solving is one of my favorite aspects of a Murray Leinster story. This story simply doesn't have this element. There are small problems here and there but they are never a struggle and I don't recall any requiring science and logic to overcome. More than anything this made the story fall flat for me. Mark Nelson is flawless as always. I didn't give up on the book because his reading is still a performance worth listening to.

A less than fair read.

The narrator had pleasant voice. The story was tolerable - save for a couple things. 1. one character's dogmatic conceit, straight out of the Bible about; "man's dominion." At least he didn't carry-on about it. Albeit, his supportive reasoning sounded as though no one could endure the truth that men of 2000+ years ago couldn't possibly glean the beginnings of the universe. I mean, strike a butane lighter before them, and it's witchcraft; try and show them a video on your smartphone, and you've imprisoned people in a magic box. And 2. an ill-prepared crew, with no technical savvy whatsoever, finding, & visiting several worlds, with no means of testing atmosphere other than cracking the door and sniffing? Really! What was needed was death of a crack sniffer, and ruins of a civilization, obviously, more advanced than ours, yet with no technical remnants to abscond(save architectural) ; or even a disinterested passing ship.

Not so subtle satire set to sci-fi

This story is getting panned a lot by some of the reviewers. Perhaps they are not used to irony, satire or comedy. I suspect 12th Night would be a problem for them. This is a far fetched story with strong satire in tradition of Swift but it also has some interesting science fiction and plot twists as well as social commentaries. There is especially breaking through the absurdity an undercurrent effectively espousing freedom of individuals as a far more effective solution to government driven solutions. Once again superb reading and especially on this one as the frequent rendering of absurd TV commercials were especially fit to Mark’s reading style