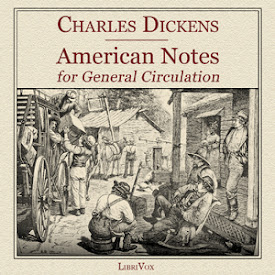 American Notes for General Circulation is a travelogue by Charles Dickens detailing his trip to North America from January to June, 1842. While there he acted as a critical observer of these societies almost as if returning a status report on their progress. This can be compared to the style of his Pictures from Italy written four years later, where he wrote far more like a tourist. His American journey was also an inspiration for his novel Martin Chuzzlewit. (Summary by Wikipedia) (11 hr 11 min)

06 - Chapter 4: An American Railroad. Lowell and its Factory System

09 - Chapter 7: Philadelphia, and its Solitary Prison

10 - Chapter 8: Washington. The Legislature. And the President's House

11 - Chapter 9: A Night Steamer on the Potomac River. Virginia Road, and a Blac…

12 - Chapter 10: Some Further Account of the Canal Boat, its Domestic Economy, …

13 - Chapter 11: From Pittsburg to Cincinnati in a Western Steamboat. Cincinnat…

14 - Chapter 12: From Cincinnati to Louisville in another Western Steamboat; an…

15 - Chapter 13: A Jaunt to the Looking-Glass Prairie and Back

16 - Chapter 14: Return to Cincinnati. A Stage-Coach Ride from that City to Col…

Interesting, and a small booboo

Listening to this after hearing the marvelous librivox recording of Dickens' MARTIN CHUZZLEWIT, which contains a sharp critique of the United States. So glad LV has also given us an audio version of Dickens' first visit to America. Well done, volunteers! Small issue not important to me, but I know LV strives for perfection...the preface consists of two takes (the text is repeated twice). Told you it was small.

There are two prefaces

In answer to the previous reviewer, there are (odd as it may seem) TWO prefaces in this edition of American Notes. They are similar, though not identical, and have been recorded exactly as written.