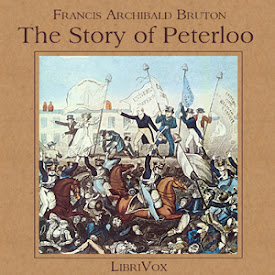 The Story of Peterloo

On 16th August 1819 around 60,000 people gathered at St. Peter’s Fields, Manchester, to rally for parliamentary reform. Shortly after the meeting began, a troop of Hussars and local yeomanry rode into the crowd, wielding clubs, swords and sabres, leaving 18 dead and more than 700 severely injured. In the following years, the Peterloo Massacre was the subject of several trials and inquiries. It now counts as one of the most significant events in the history of the British labour movement. Francis Archibald Bruton’s account of the day’s events, published for its centenary and based on a detailed examination of contemporary accounts, is both dispassionate and moving.(Introduction by Phil Benson) (1 hr 43 min)

03 - Authorities on the details of Peterloo

04 - The unrest that followed the Napoleonic wars

06 - The processions from the outlying districts

07 - The charge of the Manchester Yeomanry

08 - The Manchester Yeomanry in difficulty