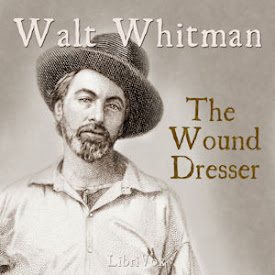 The Wound Dresser is a series of letters written from the hospitals in Washington by Walt Whitman during the War of the Rebellion to The New York Times, the Brooklyn Eagle and his mother, edited by Richard Maurice Burke, M.D., one of Whitman's literary executors. (Summary by R. S. Steinberg) (5 hr 30 min)

02 - The Great Army of the Wounded

So much in these letters is routine, with Whitman saying yet again that he had no word from his brother George (who was in the army), asking his mother about family back in Brooklyn, or urging them to write to him. But there are also heartbreaking moments, when we learn that brother Andrew has died, or hear of the sufferings of certain men in the hospital who have horrible, lingering wounds from which they will never recover. I thought it was well worth the time to listen for the insight it gives into the lives of the wounded and to see the effect that ministering for so long among the wounded had on Whitman's physical and mental well-being. The reader is excellent - his low, somewhat ragged voice seems to match perfectly the pictures of Whitman with his long beard and rough appearance.

I'd no idea this man spent so much of his time with our wounded Soldiers during the Civil War. It brings a new understanding to his writing, and respect for the man whom I've admired since high school.

And for their Southern brothers it was even more horrible. How could such agony have been?