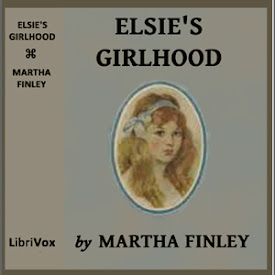 In the third book of Martha Finley's much-loved Elsie Dinsmore series, Elsie's life is traced from the tender age of 12 or 13 to the mature age of 21. Her life is not all sunshine and roses, but she is secure in the love of the Lord and her family. (Summary by GabrielleC) (9 hr 0 min)

The story is very good but on one chapter a little hard to understand.

Spoiler Alert Okay. This book was more interesting than the others, and not quite as stuffy. I still grew very weary and disgusted with Pappa's caresses and kisses. Was this the way things were back then? The way he handled the villain who tried to marry Elsie for her money was decent, except when he decided she was in need of severe punishment for not resisting him more than she did in his efforts to kidnap her. The way he handled Herbert, the kind crippled boy, was heartless and cruel. And it is portrayed as just and kind, even after he dies of a broken heart. By far the most disturbing thing about this book is Mr. Trevilla. At the end of the book he admits to what we've been hoping was not the case all a long, that he has been HOPELESSLY in LOVE with Elsie ALL ALONG. Since she was 8 years old, and he was... 23? Absolutely disgusting. And it's portrayed as good. We wonder why the father who had so much protective anger against others who tried to win Elsie never noticed his friend kissing his daughter.

A quaint continuation of the story of tender Elsie growing up in continued obedience.

They are all pretty good readers

It is a great book.Gabrielle C is a good reader but with those braces she is very hard to understand.

I really enjoyed this novel. The last reader was a little hard to understand. Thank you contributors.

Jen Remundo was a wonderful reader but the rest of them were awful. The worst was Gabrielle C who has a speech impediment and is impossible to understand, let alone enjoy!