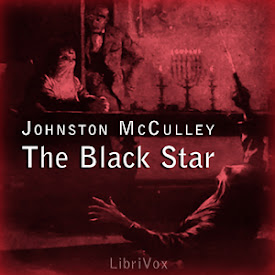 The Black Star was a master criminal who took great care to never be identifiable, always wore a mask so nobody knew what he looked like, rarely spoke to keep his voice from being recognized, and the only mark left at the scenes of the crimes which he and his gang committed were small black stars which were tacked as a sign of their presence, and an occasional sarcastic note to signify his presence and responsibility. Even those who worked for him knew nothing of him, all of which were making his crimes virtually unsolvable. The police were at a complete loss as to his identity and at a method of stopping his criminal activities. He seemed to have the perfect strategic setup and all advantages were in his favor. He even somehow knew where the wealthy kept their jewels and money, and knew when they would remove valuable items from their safes and deposit boxes. Thus Roger Verbeck decided to take on the case of the Black Star using his own methodology. The Black Star will keep you guessing from beginning to end, just as he kept the police and Verbeck guessing.

Johnston McCulley was a prolific writer in the pulp fiction vein, and his Zorro series would become immensely popular. However, prior to Zorro, the Black Star was among his first repeating characters which kept readers of the day in continual suspense until his next appearance. McCulley also wrote mysteries and detective stories using various pseudonyms, including Harrison Strong. (Introduction by Roger Melin) (8 hr 6 min)

34 - What Happened to the Chief

Very good story. Kept me interested until the very end with its surprise twist of plot. Of course the reader, Roger Melin, was excellent as usual.

First of all, props to Roger M, he's a great reader, glad he is still reading for librivox. Now to the story - This is a neat mystery/adventure novel where a wealthy businessman decides to match wits with a sneaky thief with extraordinary planning capabilities. It is going to take more than the average detective to catch this crook. Despite being a bit far-fetched at times, the story was still great. Enjoy!

my favorite reader indeed I love your voice many nights I have listened to your story telling ....you just have a way I tell you ....keep them coming ...cant wait for another and another ....best wishes to you indeed

A great tale, well-sculpted and read perfectly. As one commentator stated. it was a bit farfetched at times, but this is fiction: indulge your imagination. Perfect ending. Enjoy!

Exciting story, from start to finish , thanks so much for these storys (i call them movies) greatly read , thank you for your time. enjoyed Alot

Lots of fun if you just need something a bit silly to listen to. Lots of unbelievable action - like an old style Saturday morning serial at the movies!

Exciting right to the end. But I did guess it was Burbeck following once they thought they had him kidnapped.

Ripping yarn style adventure, typical of the period and very great fun too! Beautifully read, as always, by Mr. Melin.