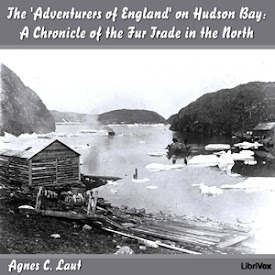 The fur hunters were explorers who had blazed a trail across a continent and penetrated to the uttermost reaches of a northern empire the size of Europe. But it was fur these explorers were seeking when they pushed their canoes up the Saskatchewan, crossed the Rocky Mountains, went down the Columbia. Fur, not glory, was the quest when the dog bells went ringing over the wintry wastes from Saskatchewan to Athabaska, across the Barren Lands, and north to the Arctic. Beaver, not empire, was the object in view when the horse brigades of one hundred and two hundred and three hundred hunters, led by Ogden, or Ross, or M'Kay or Ermatinger went winding south over the mountains from New Caledonia through the country that now comprises the states of Washington and Oregon and Idaho, across the deserts of Utah and Nevada, to the Spanish forts at San Francisco and Monterey. It is a question whether La Salle could have found his way to the Mississippi, or Radisson to the North Sea, or Mackenzie to the Pacific, if the little beaver had not inspired the search and paid the toll. (3 hr 8 min)

2 - The Tragedy of Henry Hudson

3 - Other Explorers on the Bay

4 - The 'Adventurers of England'

5 - French and English on the Bay

the jules recordings are super slow and super monotonous. some interesting content but it may put you to sleep.

great find for a history buff!