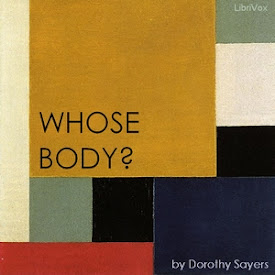 Whose Body? is the first of Dorothy Sayers’s famous Lord Peter Wimsey novels, introducing that nobleman, as well as his manservant and fellow-sleuth, Mervyn Bunter. Scotland Yard’s Inspector Charles Parker, who figures more or less prominently in later Wimsey novels, plays a central role in Whose Body? as well.

As the book opens, a bashful Battersea architect has discovered a naked body in his bath, adorned with a gold pince nez. At the same time, we learn of the disappearance – under odd circumstances – of Sir Reuben Levy, a powerful financial magnate in The City. Not accepting the police’s early assumption that the corpse and Sir Reuben are one and the same, Wimsey and Parker follow up the two puzzles alternately and interchangeably, coming together to compare notes. Bunter’s peculiar insights and photographic evidence are also important in illuminating the mystery. Ultimately, Lord Peter and Inspector Parker are forced to conclude that the two mysteries are, in fact, pieces of a single, extremely sinister plot.

Whose Body? is not as polished as Sayers’s later novels. However, it is a terrific book. The writing is beautiful, filled with vivid description, dry humor, and interesting (though often arcane) allusions. The story moves quickly, and even Sayers aficionados claim they can’t tell “whodunit” and “why” until at least half way through. This book’s elegant but also extremely friendly prose prefigures Sayers’s position as one of the three or four best of Britain’s “Golden Age” mystery novelists.

Not one of Dorothy Sayers's best

Well read by Kristen Wever and a good mystery. I had heard this and many of the Wimsey series done on BBC4 Ex a few yrs ago. I really like this series and even though I have heard alot of them on BBC4EX would like to hear the books. Thanks Librivox and Kristen for a great job.

The reader has a pleasant, easy to listen to voice. This was my first book by this author. Story seems to have various points where it could have been shortened up but overall kept my interest. The ending left me with an uneasy feeling. I will listen to more of her books if available on Librovox.

I really like the style on this one and some of the styles of reading were completely different then I've been used to. But they were all excellent so give it a whirl on your own.

Not Sherlock but Interesting Nonetheless

Not Sherlock Holmes but Interesting none the less. Got a bit long winded at times. The reader continuously mispronounced several words, like valet, through out the book but otherwise did a great job.

this story was very well written , I almost missed it until I came across version 2, Kirsten as always brings you right in to the story, and you can understand every word. a gracious thank you

Good tale lots of turns and twists. Vet nice reader lovely voice to listen to and just the right level of changes for each character to be shown. more from this lady please!.

I enjoyed the story with the twists and turns along with the writing style. Very well read and enjoyable to listen to. Thank you for the reading!

reader worth getting used to

2017 - Part of my yearly listening. Lord P.W. is such a ham. I like the chemistry he has with his Butler and others.