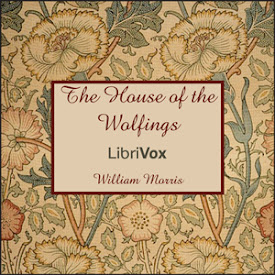 The House of the Wolfings

William Morris was a writer, illustrator and medievalist from the Romantic period and associated with other renowned authors of the time such as Dante Rossetti. His fascination with ancient Germanic and Norse people dominated his writings, the first to be set in an entirely invented fantasy world and which helped to establish the fantasy genre.

The House of Wolfings (1890), some argue, is a demonstration of Morris' socialism as the society described, though not an utopia, is clan-based, elects leaders and makes decisions in clan tribal meetings. Notwithstanding, it tells the story of how Thiodolf and his clan - the Wolfings - fight and vanquish the Roman invaders. The book is built with Morris' knowledge of the historical period and his own idealistic views, which allow him to combine facts and mythical elements. Thiodolf is protected by a dwarfish coat of mail, given to him by his lover Wood Sun, herself one of the Vala, the immortals. But things are not what they seem and what is meant to protect him, is also a curse... (Summary by Sailormoon) (8 hr 17 min)

02 - The Flitting of the War-Arrow

09 - The Ancient Man of the Daylings

10 - That Carline Cometh to the Roof of the Wolfings

12 - Tidings of the Battle in Mirkwood

13 - The Hall-Sun Saith Another Word

15 - They Hear Tell of the Battle on the Ridge

18 - Tidings Brought to the Wain-Burg

19 - Those Messengers Come to Thiodolf

20 - Otter and his Folk Come into Mid-Mark

21 - They Bicker About the Ford

22 - Otter Falls on Against his Will

24 - The Goths are Overthrown by the Romans

25 - The Host of the Markmen Cometh into the Wild-Wood

27 - They Wend to the Morning Battle

31 - Old Asmund Speaketh over the War-Dukes: The Dead are Laid in Mound

I really enjoyed this one. The mispronunciations and varied quality of some of the readers was distracting at times but it didn't ruin the story for me.