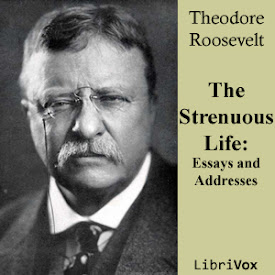 The Strenuous Life: Essays and Addresses of Theodore Roosevelt

This book is a collection of Theodore Roosevelt’s published commentaries and public addresses on the general theme of the requirements for individual and collective success in the personal, civic, political, and social arenas. (Introduction by Bob Neufeld) (7 hr 24 min)

03 - Latitude and Longitude Among Reformers

04 - Fellow-Feeling As A Political Factor

07 - The Eighth and Ninth Commandments in Politics

16 - Brotherhood and the Heroic Virtues

This is series of stump speeches given before and after the 1901 assassination of McKinley. It's mostly an exposition on civic and national duty, and an hagiography of American expansion and exceptionalism, but also a warning that our democracy can only endure if we hold our politicians to the highest standards of honesty and morality.

Stands the test of time

TR was very well spoken and insightful. Many of his topics and powerful statements are as true now as they were when he first said them.

Probably one of the best books I’ve read. Completely contradicts the liberal propaganda that is too prevalent in today’s America.