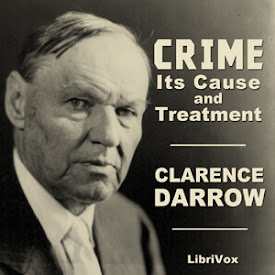 Crime: Its Cause and Treatment

Clarence Darrow was an American lawyer. He remains notable for his wit and agnosticism, which marked him as one of the most famous American lawyers and civil libertarians.

In this book, Darrow expands on his lifelong contention that psychological, physical, and environmental influences—not a conscious choice between right and wrong—control human behavior. To my ears (the reader's), the author has a rather simplistic behaviourist view of human behaviour, but he argues his position with wonderful clarity. Darrow is coherently critical of conspiracy laws, of the creation of laws by the powerful (and consequently the definition of "crime" by that group) .... and his views on the machinery of "justice" and on how criminals are treated are still very relevant. (Summary adapted from Wikipedia.) (7 hr 44 min)

Preface; Chapter 1: What is Crime?

Chapter 13: Man as a Predatory Animal

Chapter 15: Attitude of the Criminal

Chapter 16: The Law and the Criminal

Chapter 21: The Effect of Punishment on Others

Chapter 24: Stigmata of the Criminal

Chapter 25: The Good in Criminals

Chapter 26: The Defective and Insane

The reader is correct that this book reflects Clarence Darrow's deeply held belief that "psychological, physical, and environmental influences—not a conscious choice between right and wrong—control human behavior." The reader is incorrect when he dismisses this hypothesis as "a simplistic behaviourist view of human behaviour." Far from being a simple-minded behaviorist, Clarence Darrow was an intuitive genius whose theories on the causes of crime were way ahead of his time. Darrow wrote this book in 1922. It would be another 30 years before the structure and function of DNA would be discovered, Today, more than 75 years after it was written, cutting edge neurological research seems to support Darrow's central hypothesis that criminal behavior is caused by psycho-physical factors that are beyond the individual's control. Scientists working in the new field of neuro-economics have established a direct link between the mechanics that regulates individual decision-making and the genetic structure of the human brain. Just last week an international team of scientists announced the discovery of the specific part of the brain that controls decision making. See "Scientists discover brain part that drives decision-making," http://www.cbsnews.com/news/scientists-discover-decision-making-brain-structure/ (Nov. 25, 2013). See also "Fundamental role for lateral habenula in promoting subjective decision biases," http://www.nature.com/neuro/journal/vaop/ncurrent/full/nn.3587.html >>> Additional research in this area is also being conducted in the Glimcher Lab at NYU. http://www.decisionsrus.com See Paul W. Glimcher (2008) Neuroeconomics. Scholarpedia, 3(10):1759); See also "The Neural Basis of Decision Making," >> http://homepages.inf.ed.ac.uk/pseries/CCN/gold_shadlen_review.pdf. (2007). While the scientific research on the causal connection between brain structure and decision-making is still in its infancy, it increasingly looks as if variations or defects in the physical structure of the human brain can predispose certain individuals to engage in the type of impulsive decision-making that precipitates criminal conduct. Although the researchers have been focusing their studies on economic decision-making, the implications of this research for the administration of the criminal justice system are obvious. Can individuals with specific variations in brain structure be considered to have been "hard-wired" for a life of crime? Google > "brain structure" + "decision making."﻿

A serious presentation of the issue.

Neither dry nor dull.

Quite compelling, especially as read by Peter Yearsley.