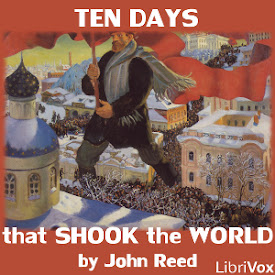 Ten Days that Shook the World

Ten Days that Shook the World (1919) is a book by American journalist and socialist John Reed about the October Revolution in Russia in 1917 which Reed experienced firsthand. Reed followed many of the prominent Bolshevik leaders, especially Grigory Zinoviev and Karl Radek, closely during his time in Russia.

John Reed died in 1920, shortly after the book was finished, and he is one of the few Americans buried at the Kremlin Wall Necropolis in Moscow, a site normally reserved only for the most prominent Soviet leaders.

Max Eastman recalls a meeting with John Reed in the middle of Sheridan Square during the period of time when Reed isolated himself writing the book:
"...he wrote Ten Days that Shook the World - wrote it in another ten days and ten nights or little more. He was gaunt, unshaven, greasy-skinned, a stark sleepless half-crazy look on his slightly potato-like face - had come down after a night's work for a cup of coffee.
'Max, don't tell anybody where I am. I'm writing the Russian revolution in a book. I've got all the placards and papers up there in a little room and a Russian dictionary, and I'm working all day and all night. I haven't shut my eyes for thirty-six hours. I'll finish the whole thing in two weeks. And I've got a name for it too - Ten Days that Shook the World. Good-by, I've got to go get some coffee. Don't for God's sake tell anybody where I am!'
Do you wonder I emphasize his brains? Not so many feats can be found in American literature to surpass what he did there in those two or three weeks in that little room with those piled-up papers in a half-known tongue, piled clear up to the ceiling, and a small dog-eared dictionary, and a memory, and a determination to get it right, and a gorgeous imagination to paint it when he go it. But I wanted to comment on now was the unqualified, concentrated joy in his mad eyes that morning. He was doing what he was made to do, writing a great book. And he had a name for it too - Ten Days that Shook the World!" (From Wikipedia) (14 hr 42 min)

09 - The Committee for Salvation

Some readers are better than others (different readers per chapter) but overall quite good. Very detailed but down to earth history of the revolution. Got a bit bogged down with names and specifics but most of the time was a great first person account of events. Good for background listening if you're bored or overwhelmed by details. I gapped out for a lot of it but there kept being these hilarious and insightf passages that would draw me back in.

Thanks for the recording!

Thanks for recording this. I am wondering where the computer-generated voice for the appendices and other chapters is from? It is very good. I wonder if it could be used to re-record track 16, the Peasants Congress?

This is a pretty good book. Having multiple readers was a bit distracting and I think the author could have been a bit more direct. That said, my book club thoroughly enjoyed it.

Like a lot of stories coming out of Russia I just don't really care. They lead really boring lives. Unless it's written by Dostoevsky of course!

LibriVox does not use computer generated voices. All readers are flesh-and-blood people.

The best history of the Russian October Revolution

it is a good book for my son