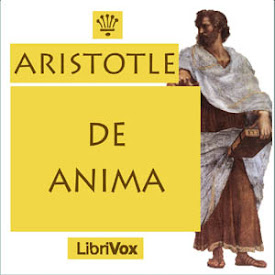 On the Soul (Greek Περὶ Ψυχῆς (Perì Psūchês), Latin De Anima) is a major treatise by Aristotle on the nature of living things. His discussion centres on the kinds of souls possessed by different kinds of living things, distinguished by their different operations. Thus plants have the capacity for nourishment and reproduction, the minimum that must be possessed by any kind of living organism. Lower animals have, in addition, the powers of sense-perception and self-motion (action). Humans have all these as well as intellect. The notion of soul used by Aristotle is only distantly related to the usual modern conception. He holds that the soul is the form, or essence of any living thing; that it is not a distinct substance from the body that it is in; that it is the possession of soul (of a specific kind) that makes an organism an organism at all, and thus that the notion of a body without a soul, or of a soul in the wrong kind of body, is simply unintelligible. (He argues that some parts of the soul—the intellect—can exist without the body, but most cannot.) It is difficult to reconcile these points with the popular picture of a soul as a sort of spiritual substance "inhabiting" a body. (Adapted from Wikipedia) (3 hr 33 min)

Mostly outdated text. Perhaps the only interesting bit is on Though, Imagination, Appetency and Movement towards Desire or away from Danger... Fear and Greed?