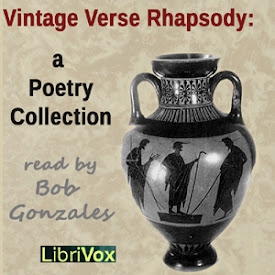 A collection of poetry selected and performed by Bob Gonzalez, rhapsode. Rhapsodes of Ancient Greece were “song-stitchers,” performing selections from the epics of Homer and Hesiod. The contemporary rhapsode performs the classical poetry of his or her language, culture, and tradition. Any particular collection and arrangement of poems for performance I term a “rhapsody.” In general terms, a rhapsody is an ecstatic expression of feeling and enthusiasm. In music, a rhapsody is an instrumental composition irregular in form and suggestive of improvisation. The poems in this rhapsody comprise a number of poems that I have performed in public and known for much of my life as well as several recent additions to my repertory. They are arranged in chronological order from the 16th century to the early 20th century. Some of the poets represented here are Edmund Spenser, William Shakespeare, John Donne, John Milton, Alexander Pope, William Blake, William Wordsworth, John Keats, Alfred Tennyson, Walt Whitman, Emily Dickinson, Lewis Carroll, and Robert Frost. (Summary by Bob Gonzalez) (1 hr 44 min)

What is Our Life?

There is a Lady Sweet and Kind

My Mind to Me a Kingdom Is

The Glories of our Blood and State

To His Coy Mistress

On a Fly Drinking Out of His Cup

It is a Beauteous Evening

The River of Life

The First Kiss of Love

When I was one-and-twenty

The Road Not Taken

Having had the day spoilt by reading a hostile review on this site, I abandoned my planned recording session and settled down with this superb collection of lyric verse read by 21st-century rhapsode, Bob Gonzalez. Thanks to Bob for two hours of utter delight. My favourites were the Whitman selections, particularly "I Saw in Louisiana a Live-Oak Growing". Hope there's a Volume 2 on the way.

I really enjoyed this collection and it was read very nicely.