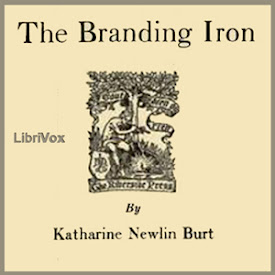 From the cold and mountainous regions of Wyoming to the bright lights of the big city, The Branding Iron is the story of a remarkable woman, Joan Carver. Born of poor means, at a fairly young age Joan decides to leave her father and strike out on her own, but she is to face more difficulties and hardships than she had reckoned for, and the men she encounters on her way share different means of dealing with her; and she of them. She becomes her own individual, with a strong will and a determination to lead her life as she sees fit. As with many of Ms. Burt's stories, The Branding Iron is filled with unexpected surprises at each turn. (Summary by Roger Melin) (8 hr 1 min)

05 - Pierre Becomes Alarmed About His Property

10 - Prosper Comes to a Decision

13 - The Training of a Leopardess

Even I found this one kind of weird

Even I found this one kind of weird. The guy - Pierre - he knew her - Joanne - for about 30 seconds and then they went off and got married and moved to his remote ranch - ties her - Joan - up and brands her with a branding iron, and another guy fortuitously saves her and shoots Pierre - and then they live together in guy 2's remote house - and then he cuts out with no explanation - and then time passes and she turns up again at a ranch under the name Jane, all rough and tough - and then she gets recruited by the "Jew" to be an actress in NYC - and then guy 2 turns up again - and he secretly wrote the play she's acting in, see - and then there's a boring side story about how the Jew's wife was really secretly hooked up with guy 2 all along and wants a divorce from the Jew - and then Joan/Jane decides it's OK to go off with guy 2 again but then guy 1, the guy who branded her, Pierre, shows up and they kiss and all is forgiven. And oh yeah, they briefly mentioned that she had a baby with guy 2 but the baby died. Roger Melin, is, as always, an excellent reader.

A tale of selfishness, cruelty, and ultimate redemption. The 1919 story abounds with the popular prejudices of its era that made it difficult reading/listening for me. I just wanted to shake some of the characters and tell them to get over themselves! In particular, the self-obsessed writer and the strong central female character who, nevertheless, faints away at a crucial point, were rather annoying. But that, of course, is to be expected. The author's treatment of Jasper Morena, an assimilated Jew (called "the Jew" in the text), is a study in itself. Here's a verbatim section: "Jasper was perfectly conscious that his own gesture and speech of greeting were too eager, too ingratiating, that they had a touch of servility. He hated them in himself, but they were inherited with his blood, as instinctive as the wagging of a dog's tail." The lack of a rating reflects my ambivalence over the material and not the skillful reading of Roger Melin who, as usual, does a fine job. TheBookworm (Manchester, UK)

Found this little treasure while reading Westerns. Its roots are isolated late 19th century Wyoming. But this story could have been told with any of many places around the world back then. The Amazon jungle, Siberia, deep Africa, or just with isolated classes of people living in the same place. Its a little scary in some places, but in the end it is about character. There is a little anti-semitism in it which was normal for the time, but damaging to the books historical reputation. I reduced a star for it. Current writers should take note.

I enjoyed this reading of "The Branding Iron". I give this story 4 stars. The strength of the main character, and how she deals with being on her own, held my interest from beginning to end, and kept me wondering in which direction the story would turn. I enjoy stories which portray women of strength. The narrator was very good, easy to listen to. I recommend this audio book to anyone who enjoys early 20th century novels.

Confusing Is it a western, a

Is it a western, love story or an early soap opera? Begins well, then drags on. To many plot twists. Best part was Melin's reading.

keep me going for a bit ... thank you for your precious time .. greatStory