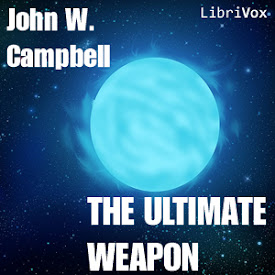 The star Mira was unpredictably variable. Sometimes it was blazing, brilliant and hot. Other times it was oddly dim, cool, shedding little warmth on its many planets. Gresth Gkae, leader of the Mirans, was seeking a better star, one to which his "people" could migrate. That star had to be steady, reliable, with a good planetary system. And in his astronomical searching, he found Sol.

With hundreds of ships, each larger than whole Terrestrial spaceports, and traveling faster than the speed of light, the Mirans set out to move in to Solar regions and take over.

And on Earth there was nothing which would be capable of beating off this incredible armada—until Buck Kendall stumbled upon THE ULTIMATE WEAPON. (Introduction by John W. Campbell) (3 hr 39 min)

I really didn't have very high hopes for this book. The science was interestingly far fetched and very engaging. Very satisfied. And the narrator was great.

This book started out fairly entertaining, however I couldn't get past chapter 7 due to Richard Kilmer's monotonous reading style. He has a great voice, but it's that of a flat radio broadcaster reporting the weather. At the end of EVERY SINGLE SENTENCE is a tone drop. There is zero excitement or feeling in his voice and it made the book not worth listening to. It's hard to get into the excitement of a scifi book when it's read by a droning disconnected voice.

Perfectly captures the essence of Campbell

Campbell is a wonderful author, and Richard Kilmer’s method of reading perfectly captures the clinically-detached writing style that runs throughout much of Campbell’s work. His voice is clear, and he doesn’t stumble over the vast array of techno-jargon involved. It would be great to get this kind of treatment for the Don A. Stuart stories, when they eventually enter public domain.

This story was excellently read. The story itself is entertaining in the style of old us vs. them sci-fi. It is a bit lacking in compelling and realistic characters and the science is questionable even for sci-fi. Still a fun read that can get the blood flowing.

Good old fashioned impossible science fiction, spoiled by a reader who makes a sentence out of each phrase. Hard to listen to, for sure. a good reader could make this a completely different story! The reader has a great voice, by the way- he is just a poor reader.

I listened to this with my son. He found it more interesting than I did. The similes, metaphors and exclamations were painful. I wouldn't have finished the book, but my son wanted to find out how it ended. In the end, neither of us were impressed.

Beautiful narration... story was very interesting. There was not one woman in the entire story, needless to say zero relationship. Very technical, I think the story as a whole might relate more to males, but I enjoyed it just the same.

The story was not bad. It might be better to read than to listen to. The reader's cadence, tempo and inflection are really off. It is like listening to your computer try to read to you.