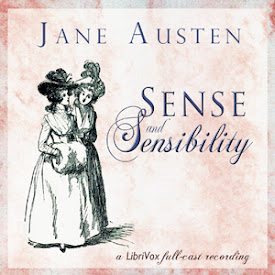 The story is about Elinor and Marianne, two daughters of Mr Dashwood by his second wife. They have a younger sister, Margaret, and an older half-brother named John. When their father dies, the family estate passes to John, and the Dashwood women are left in reduced circumstances. The novel follows the Dashwood sisters to their new home, a cottage on a distant relative's property, where they experience both romance and heartbreak. The contrast between the sisters' characters is eventually resolved as they each find love and lasting happiness. Through the events in the novel, Elinor and Marianne encounter the sense and sensibility of life and love. In this dramatic reading, Librivox volunteers lend their voices to bring Jane Austen's classic story to life. (Summary by Wikipedia and wildemoose)

I wanted to give the group a chance but it is difficult when not only do some sound like they are always asking a question when they are making a statement but others that don't check the pronunciation of words. I almost got through the idea of how Mrs. Dashwood was being read when I realized the narrator was having issues as well. A piano forte is NOT a piano fort, as an example. Most of the readers are fine but when the narrator didn't do research on how some words are pronounced and has such a large share of reading... In 6 chapters it was too much to ignore. I'm sorry to be like the other reviews but it becomes too distracting for enjoyment.

Very much enjoyed this. Kudos to the fine volunteer readers EXCEPT for the over trying, fakey voice of Mrs Dashwood. This reader made me cringe every time she read her lines, and so less than 5 stars given. Thanks all for your efforts though!

All the readers did a great job. Everyone was understandable and read well. Only the reader of Mrs Dashwood was annoying to listen to... I have heard her read before and she always reads with too much inflection at the end of every sentence. It is really distracting and only is fitting every twenty sentences or so. Other than that, I enjoyed the story a lot. Jane Austin's books are quite similar, but she does a good job creating new characters making us have strong connections to them

I enjoy the book but the person who does the mom's voice is really annoying. she doesn't read like they would speak naturally and I cant concentrate on what she says when she reads like that.

Just as I had to accept at an early age that I will never be a super model, the reader of the Mrs. Dashwood part needs to accept that she is not cut out to be an actress or narrator. Everyone else was wonderful.

I really enjoyed the story and the dramatic reading version. However the person who reads Mrs Dash wood needs to listen to herself. She has an annoying habit of raising her voice at the end of each sentence. Regardless of that, I thoroughly enjoyed this read.

Loved the dramatic reading! A couple of the readers voices did not match the characters, the reader for Mrs Dashwood should read in a more conversational manner. Despite that, it is still a wonderful book to listen to!

Great With One Exception

The dramatic cast is excellent. The woman who reads Mother Dashwood, however, needs to read more naturally. Her pitch repeatedly goes up or down when it ought not to.