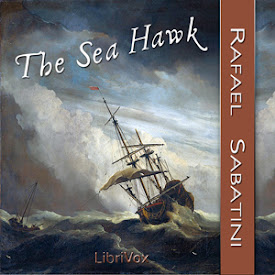 The Sea Hawk is a novel by Rafael Sabatini, originally published in 1915. The story is set in the late 16th century, and concerns a Cornish sea-faring gentleman, Sir Oliver Tressilian, who is villainously betrayed by a jealous brother. After being forced to serve as a slave on a Spanish galley, Sir Oliver is liberated by Barbary pirates. He joins the pirates under the name "Sakr-el-Bahr", the hawk of the sea, and swears vengeance against his brother. (Summary from Wikipedia) (14 hr 37 min)

Preface and Chapter One The Huckster

The Lion of the Faith

In the Sight of Allah

Simply put, I enjoyed this. I downloaded it without reading the official blurb, expecting it to be a history of the British sailor known as "the Sea Hawk". Nope, I got that wrong. What we have here is a story of the sea, betrayal and love. In the tradition of these older books we have the set up, the recovery, the chance for revenge, and the endgame. The story is not your hyper paced modern adventure but rather a steady series of events that explore the characters and their motivations. I was enthralled by the story slipping an episode/chapter between every other podcast I've been listening to, and was happily satisfied by the ending. Well worth listening to. Read more of my reviews of Free Audio at http://freeaudioreview.blogspot.com/

So much better than I ever expected

Both readers did a good job. I generally dislike multiple readers but these two complimented each other nicely. The story at first seemed like it would be slow and uninteresting but soon became complicated, mysterious and full of adventure. Sir Oliver, had he existed, would be the most determined, intelligent, ferocious, loving and powerful man. The interpretation of Muslims and their religion is almost unnerving considering the state of the world today. If you like adventure, romance, intrigue and courageous tales, this is a book to hear.

Hollywood did not do it this well. The plot was complicated and compelling. The ending was satisfactory and hoped for. although it was in doubt until the very end. The pair of readers we're each excellent and the alternate chapters suffered not, despite being an unusual arrangement. The listener learns much about the inner workings of Islamic hierarchy; if that is of interest I would encourage the reading of "THE WANDERER" by Waltari.

This novel has a bit of everything. Intrigue, love, sea battles, murder, all skillfully woven together. The two readers are excellent except in one early chapter where they read alternatively the different voices. It just doesn't work. Don't let that turn you off. The rest of the novel each reader does complete chapters . I look forward to listening to to more Sabatini sagas .

It's no wonder, the Hollywood of Old, made millions of dollars, by bringing "Swashbuckling Heroes" to the silver screen, in adaptations of stories such as this & others, by Rafael Sabatini. I'd follow "Sir Oliver", anywhere!! Thanks be to Sandra & Denny, a masterful duet of Vocal talent

In characteristic style the author backs our hero into one impossible corner after another followed by increasingly clever and miraculous escapes that make you think "I wish I had thought of that" all to the chagrin and consternation of an amusing cast of villains you love to hate.

This is a story that has to be read it has everything that a book lover would need no matter what type of books you like this book has to be read . The readers of this book are first rate .I loved hearing this book being read most impressive.

Enjoyed it all and both narrators are great, but for the fact they alternated every chapter. Just getting into Sandy's voices when the chapter ends and Denny takes over! Apart from that, a great tale and a bit of an insight into Islam of old.