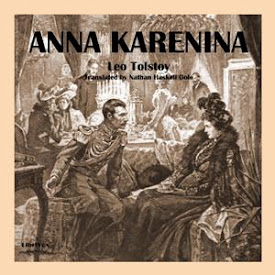 Two love stories are set against the backdrop of high society in Tsarist Russia. Anna awakes from a loveless marriage to find herself drawn irresistibly to the dashing cavalry officer, Count Vronsky. Levin struggles with self-esteem, and even flees to the country, before gaining courage to return and offer himself to the beautiful and pure Kitty. Through troubled courtships, reconciliations, marriage and the birth of each one’s first child, Anna and Levin experience joy and despair as they each struggle to find their place in the world and meaning for their lives. (Introduction by MaryAnn) (36 hr 52 min)

dfkinjer is correct - I don't speak French. I never had the opportunity to study French in school and now that I am working full time, I don't have time to take lessons. I did consult several on-line text-to-speech pronunciation guides for every French word and passage. That was one of the most time consuming aspects of reading this book and it is precisely that which has stopped me thus far from tackling volume 2 of War and Peace. Having listened to some of the English renditions these websites put forth, I am not surprised that my attempt to mimic on-line text-to-speech French falls far short of a native speaker. I assure you that my Russian is just as bad as my French. If my inability to speak French (or Russian) is going to bother you, then I suggest that you not listen to this audiobook. For my part, I had a wonderful time reading this book. Tolstoy is a story-teller of the highest caliber. I am thankful for the team of volunteers at LibriVox and the internet platform provided by Internet Archive which together make it possible for me (and many others like me, mostly amateurs who pursue this as a hobby in our free time) to read the books that we love and make them available at no charge to whoever chooses to listen.

To those unfamiliar with this book, it is one of the most famous novels of all time. Tolstoy is a master of explaining human emotion, and is as much a psychoanalyst as a fiction writer. By reading this book one can get more familiar with their own to thoughts & emotions, which is I think the point - the actual plot line is secondary in importance to the dialogue between the characters & their associated thoughts, as explained by Tolstoy. Don't worry if you already know the ending to the book, almost all people who read it already know the ending before they start, but try to enjoy the dialogue on each page & connect it with the way you think and act in your own daily life, and the personalities of the people you have met over the years.

I enjoyed the book much more than I anticipated, reading mediocre

I enjoyed this book quite a lot, though I was skeptical. I had decided to try it because it is listed on one of those lists of classics that one should read some time before kicking the bucket. I'm left with certain questions about why Tolstoy did what he did with part 8, and I will look for analyses of the book to see what others think. As far as the reading - it was mediocre. I've had some much better readers from Librivox. One aspect that detracted from the quality of the reading was MaryAnn Speigel's pronunciation of French. Considering that so many times the characters speak in French, it would have improved the quality of the readin had she made the effort to learn how to read French.

Despite the overall Victorian style, Tolstoy shows glimpses of a new way of writing that creates a vivid picture of the world in this book. 90% of the book feels like Middlemarch by George Elliot, but better. The other 10% has glimpses of 20th century authors like Hemingway. It’s way too long but still incredibly well written. The narrator, Mary Ann Spiegel, does a fantastic job, speaks clearly, and conveys different characters personalities effectively.

I first heard Maryann read War and Peace on Librivox but within a few chapters the readers were so much less skilled that I needed to leave that book! I was very glad to find Maryann voicing another timeless Tolstoy great.

A Double Dose of Brilliance in “Anna Karenina”

. Romance, Suffering, and Brilliance in Tolstoy’s “Anna Karenina” My previous experience with Tolstoy isn’t that much different from the one Woody Allen relates in his joke about speed reading. The joke goes like this— “I read War and Peace last night. It’s about Russia.” My experience with Anna Karenina involves Greta Garbo, who did both a silent film version of the book and a “talkie.” I’ve seen both. They’re about this beautiful actress named Greta Garbo. Obviously, Greta made quite the impression on me. I hadn’t a clue what the story was about, for upon seeing Greta, I became the slack jawed yokel, Cletus, from the Simpsons. My more recent encounter with the book is a far more diverse one. In this case I have to admit that I haven’t “read” it; I had it read to me by a woman, no doubt as beautiful as Garbo, who read it for the free book project, Librivox. In this case though, instead of the woman being a distraction, she was is in fact a terrific teacher. Her name is MaryAnn Spiegel. I can’t think of a single Hollywood actress, including my favorite Meryl Streep, who could have done a better job with the project, for an actress’s job includes using facial expressions to convey meaning, while Ms. Spiegel has only her articulation and modulation of voice. Spiegel’s work is a great tour de force. Every word is clearly pronounced, and in the multiple languages which Tolstoy uses in his book. Spiegel seamlessly moves from character to character giving each a distinct tone such that it’s easy to know who is speaking. But much more than this, what Spiegel does is enunciate the meaning of the words expressed. Spiegel is someone who has obviously carefully studied the work and understands it well. Indeed, I would never have understood the book with the level of understanding I attained from hearing Ms. Spiegel’s expressed inferences from the narrative and dialogue. I came to this decisive conclusion after reading a few pages of the book myself. Indeed, I think Cletus himself would actually understand the book to a fairly decent extent if he listened to MaryAnn Spiegel’s reading/performance. It’s a lengthy book, so the quality that Spiegel maintains throughout it is extraordinary. The same can of course be said of the book’s author. Technically, I suppose the book is a Romance. But it reaches the “brightest heaven of invention” with the parallel stories taking place within it and the fact that we don’t get lost wondering who is who in a book as well populated as this one. The book is a serious work of literature. As great as Dickens is, one cannot say that he reached this level of sophistication. For instance, there is a death scene that is heart-wrenching; one tears up, but it’s not a “tear jerker” scene. Moreover, there is significant suspense in the scene because there is an outside chance that the person might live. Oscar Wilde’s observation is salient in this regard, for he said, “You would need to have a heart of stone not to laugh at the death of Little Nell,” a character in Dickens’ book, The Old Curiosity Shop. There’s not much sentimentality in Tolstoy’s masterpiece, but what one gets in its place is stark reality. Tolstoy understands both the praiseworthy and the defamatory inclinations of the human heart, and what’s more, he realizes that they often abide in the same heart—at least in those that have a smattering of depth to them. That is ultimately what is so mesmerizing about Tolstoy’s novel: it has a sweeping narrative that covers much territory, and much of that territory is the pathfinder observations by someone of extreme intelligence and insight. The characters in Anna Karenina are from the upper strata of Russian society, so they perhaps to a greater extent than most people fall into the two categories that Christopher Hitchens described so well when he wrote: “To be a spoiled person is not to be well-off or favored by fortune or protected from brute realities. It is to be well-off and favored by fortune and protected from brute realities and not to know it.” Many of the characters understand the distinction in this novel, if not at its beginning; they do at its end. Don’t worry if you think this book might be over your head, because you, like me, will have MaryAnn Spiegel to help guide you along through one of the great novels, and you’ll finish this book a better person for it.

Something to Make the Russian Giant Proud

This magnificent reading by Spiegal and the rest of the Librovox team should be something of a new gold standard in audiobooks, something which others can learn from. The reader's voice is clear and articulate, her pace is steady, and she's consistent without being over-the-top when she's transitioning between the genders' voices (eg. from Levan's to Kitty's). She makes a few minor errors of pronunciation, relegated only to foreign terms. But this is a very small criticism indeed. This reading was professional and delivered in a fashion as transcendent as the text itself. A masterful performance.