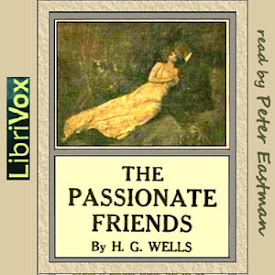 H. G. Wells is best known for his science fiction, but some of his greatest works were in other genres. The Passionate Friends is a love story. It also is a story about dreams, despair, jealousy, sex, the struggle against social convention, the future of civilization, and much much more. It is written by a father to his son, "not indeed to the child you are now, but to the man you are going to be." He writes it so that one day, perhaps when he is dead, his grown son can read it and rediscover him as a friend and equal. In the process, he tries to make sense of a lifetime's experiences and distill some kind of wisdom from them. It is quite simply a beautiful book, both inspiring and heartbreaking. (Summary by Peter Eastman) (12 hr 48 min)

Mr. Stratton to His Son

The Marriage of the Lady Mary Christian (parts 1-4)

The Marriage of the Lady Mary Christian (parts 5-9)

This Swarming Business of Mankind (parts 1-2)

This Swarming Business of Mankind (parts 3-6)

The Arraignment of Jealousy

Better than a Jab in the Eye with a Sharp Stick

As a fan of HG Wells this was one of my least favorites. The views on marriage were antiquated and the romantic relationships I felt were naive and overly dramatic. And yet, I was inspired by the altruistic aspects of the story which made it worth suffering through for me. The reader has a quite tolerable narration style, however, in the spirit of constructive criticism, I found the female characters all sounded the same... whiney with frequent strong accents on words that - to me - were startling and unnerving. I also found myself wishing for a male character with a masculine voice instead of sounding too similar to the females. Having said that, I do appreciate the effort of all the readers on LibriVox.

Unlikeable romantic couple. Too many contrivances. Wells seems to think that women in love don't want or need sex even in marriage to a man they adore. Her elitism and materialism are never confronted by his feelings of the unjust treatment of the workers/slaves who toil in her family's South African mines.

Incredible and modern story that despite a 100 years is so relevant to our lives now. HGWells May be famous for his science fiction but he also had a deep knowledge of the human experience

I wonder how this book went over when it came out