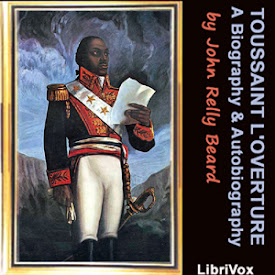 Toussaint L’Ouverture: A Biography and Autobiography

François-Dominique Toussaint L’Ouverture (1743-1803) rose to fame in 1791 during the Haitian struggle for independence. In this revolt, he led thousands of slaves on the island of Hispañola to fight against the colonial European powers of France, Spain and England. The former slaves ultimately established the independent state of Haiti and expelled the Europeans. L’Ouverture eventually became the governor and Commander-In-Chief of Haiti before recognizing and submitting to French rule in 1801. In June of 1802, L’Ouverture was arrested by French forces and taken to France where he was imprisoned at Joux. There he penned his autobiography “. . . to render to the French government an exact account of my conduct.” L’Ouverture died in prison on April 7, 1803 from pneumonia.

Although L’Ouverture died a captive of the French, the revolution he led was historically perhaps the most significant world event opposing slavery. It precipitated a re-examination--among the major European powers as well as those in the new world--of the right of all mankind to be free and self-governing.

John Relly Beard, an English minister, wrote The Life of Toussaint L’Ouverture and published it in London in 1853. Ten years later, the biography was re-published and augmented to include L’Ouverture’s 35-page translated autobiography--along with other documents and contributions by public officials--and was re-published in Boston. This reconstituted edition was titled, Toussaint L’Ouverture: A Biography and Autobiography. (Introduction by James K. White) (13 hr 38 min)

Book I, Chapter I

Excellent insight on the history of Haiti and its people. Who would have believed it, given the circumstances of the country today. The first place to fight the tyranny of slavery and the first to suffer the consequences up to the present day.

a further study of human rights

Very well presented and given with probity. Accuracy and myths were delineated so as to provide the reader with a truthful account.

loved the historical narrative. i had no idea that this historical event was so complex. the final outcome overcame amazing obstacles

Awake your Love for History