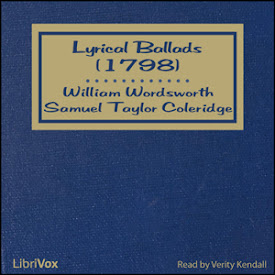 Lyrical Ballads, with a Few Other Poems is a collection of poems by William Wordsworth and Samuel Taylor Coleridge, first published in 1798 and generally considered to have marked the beginning of the English Romantic movement in literature. The immediate effect on critics was modest, but it became and remains a landmark, changing the course of English literature and poetry. Most of the poems in the 1798 edition were written by Wordsworth, with Coleridge contributing only four poems to the collection, including one of his most famous works, The Rime of the Ancient Mariner. (Additionally, though only the two writers are credited for the works, William's sister Dorothy Wordsworth's diary which held powerful descriptions of everyday surroundings influenced William's poetry immensely.) (Summary by Wikipedia) (2 hr 3 min)

Lines written at a small distance from my House...

Last of the Flock, The

Lines written near Richmond, upon the Thames, at Evening

The Tables turned; an Evening Scene, on the same subject

Complaint of a Forsaken Indian Woman, The

The reading was quite good to focus on words and not the readers inflection. Also liked the footnotes since I was not reading for enjoyment but to understand the work.

The sound is horrible and the narration is not the proper one to Romantic poetry. Footnotes shouldnât be read; this makes the reader feel lost and not concentrate in the poem itself.