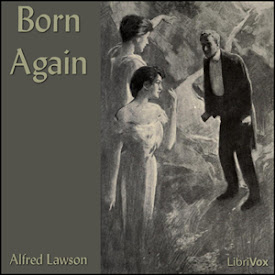 "I doubt that anyone who reads [Born Again] will ever forget it: it is quite singularly bad, with long indigestible rants against the evils of the world, an impossibly idealistic Utopian prescription for the said evils, and - as you will have gathered - a very silly plot." - oddbooks.co.uk

Alfred Lawson was a veritable Renaissance man: a professional baseball player, a luminary in the field of aviation, an outspoken advocate of vegetarianism and economic reform, and the founder of a pseudo-scientific crackpot philosophy called Lawsonomy. Born Again, his only novel, is a bizarre, delirious, and delightfully silly utopian science-fiction novel that lays the groundwork for the philosophy that would later dominate Lawson's life. It tells the story of John Convert, a wayward, seafaring soul (based loosely on Lawson, minus the conveniently symbolic initials) who is tossed overboard by his crewmen after a physical altercation. Convert awakens on an island inhabited by a race of superhuman giants -- called the Sagemen -- who slumber in their subterranean city. He then meets Arletta, a giantess who takes Convert on a journey that will change his life in ways too fantastically strange to imagine. (Introduction by ChuckW) (7 hr 46 min)

rereading listening to this book

i started this book about 41/2 years ago and was very intread and thankfull of the it being avaable . for some reason or less i did not finish it and till now picked it up and finished now. not much i will can say other then its a mush read. it pulls you in the same way it takes you out? in good spirts! thank you to the ones that have read this book. our blessing are still moving the way we want them. rvl

one of my fav's