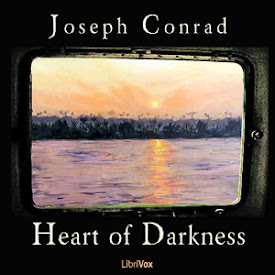 Set in a time of oppressive colonisation, when large areas of the world were still unknown to Europe, and Africa was literally on maps and minds as a mysterious shadow, Heart of Darkness famously explores the rituals of civilisation and barbarism, and the frighteningly fine line between them.

We get the tale through a classic unreliable narrator, relating as Marlow, a ship’s captain, tells how he was sent by the Company to retrieve the wayward Kurtz, and was shaken to discover the true depths of darkness in that creature’s, and in his own, soul. Conrad based the work closely on his own terrible experience in the Congo.

This work has been reinterpreted and adapted into many modern forms, the most well known being the film Apocalypse Now.
(Summary written by Marlo Dianne) (4 hr 10 min)

Conrad story is provocative and, at times, suspenseful. Yet it's subtle morals may be the most necessary components of the novel. With these considerations I highly praise this reader for her accurate portrayal in tone, inflection, rhyme and pace. Listen to this story by this reader. In regards to the poor rating by some reviewers, a few things. This is a volunteer reader you're listening to, show some appreciation for her taking her own time. The complaints made are for minor issues that can be minimized by simply not listening to it so loud. (I personally was in part 3 before I noticed.) Lastly, please take in the consideration of the average person liking fur a free audio book when reviewing, otherwise this reviewer system is inaccurate and useless as a tool.

I very much enjoyed Kristin Luoma's reading of this classic Conrad novella. Her palpable enjoyment of the narration was evident in many passages.

This story has become a classic and everyone must have heard the phrase "the horror" which appears to have started in this story. We have a story that is not quite an adventure and not quite a travelogue. It falls somewhere in between. Oddly we have savages attacking the "white men" on a river boat but yet it never quite reaches the level of excitement that constitutes adventure. What we have a story that starts as a journey through the jungle and then becomes some odd kind of relationship story between the main protagonist and the mystery character "Kurts". I have to say that I picked up this story because of its "classic" branding, yet I dont really feel it lived up to that title. The story was fairly bland, the "relationship" was never really developed and appeared to rest on assumptions I could not fathom. Sadly disapointed. Reading 2/3 Production 2/3 Story 1/3 Read more of my reviews at http://freeaudioreview.blogspot.com/

How are we different?

Conrad skillfully exposes the effects of 'advancing civilization' by raising the question of what the colonials are doing vs what they tell themselves they are doing. The question is addressed throughout, beginning in Belgium and is carried into the voyage (ship bombarding unseen enemy on the African coast). Again it is raised in the presence of the miners at the mouth of the river, and then on upstream. The book ends with a restatement of the delusion at home. What is civilization? What is barbarism? Compare the ghostly miners with the heads on the pikes. Are we different at heart? There is much more in the book, but it is hardly as trivial as reviewed below. Kristin Luoma is one great reader

In college I had to read LORD JIM, a masterpiece said my instructor. I found it to be a somewhat interesting story related in a very strange, incohesive fashion. Sometimes, an author or a painter is elevated to greatness by critics and so-called experts for reasons that escape most of us (Picasso, for istance). Conrad is another of these. I have recently read four of his works, none of which showed any improvement over LORD JIM. The two stars are for the reader. If anyone wants to read a Conrad work, this is the one to read--it is the shortest!

I had to read this book for school, but I had trouble with my pace so I started listening to it. It's much easier to listen to; however, the verbage is still quite harsh to the ear. The story in and of itself is valuable, timeless, and insightful.

A very worthwhile audio interpretation of a work that is itself beyond praise. Ms. Luoma's reading is well paced, expressive, and true to the text. Listening to the work reveals nuances that may have escaped you when you read this one for Freshman Lit. Highly recommended.

The Heart Of Darkness

A great story poorly read. I read this book many years ago and loved it. I was quite disappointed in this reading. The young lady did her best but sadly her best was not good enough.