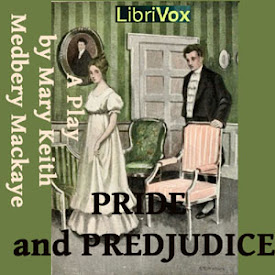 Pride and Prejudice: A Play

Pride and Prejudice, a comedy of manners and marriage, is the most famous of Jane Austen's novels. In this dramatic adaption by Mary Keith Medbery Macakaye some liberties are taken with the storyline and characters, but it is still a fun listen or read. Perhaps a good introduction for someone not ready to tackle the complete novel ~ and for the reader familiar with the work, a laugh can be had at the changes that were made in order to adapt it to the stage (Summary by Maria Therese)

This was an enjoyable play adaptation of Jane Austen's Pride and Prejudice. I can't give it 5 stars. Several times Darcy and Colonel Fosters names were messed up. This would be even more confusing if you didn't know the story. One reader mispronounced several common words yet appeared to be a native English speaker. I would have given out 4.5 but my App would only let me choose 3.5 or 5.

It was nice, only sort of confusing if you aren’t familiar with the book Pride and Prejudice.

The storyline is rewritten in a frustrating disjointed way. some of the readers are difficult to understand.