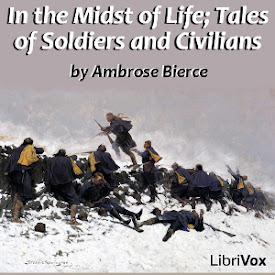 In the Midst of Life; Tales of Soldiers and Civilians

These stories detail the lives of soldiers and civilians during the American Civil War. This is the 1909 edition. The 1909 edition omits six stories from the original 1891 edition; these six stories are added to this LibriVox recording (from an undated English edition). The 1891 edition is entitled In The Midst Of Life; Tales Of Soldiers And Civilians. The Wikipedia entry for the book uses the title Tales of Soldiers and Civilians.

Ambrose Gwinnett Bierce (June 24, 1842 – after December 26, 1913) was an American editorialist, journalist, short story writer, fabulist and satirist. Today, he is best known for his short story, "An Occurrence at Owl Creek Bridge" and his satirical lexicon, The Devil's Dictionary. The sardonic view of human nature that informed his work – along with his vehemence as a critic, with his motto "nothing matters" – earned him the nickname "Bitter Bierce." Despite his reputation as a searing critic, however, Bierce was known to encourage younger writers, including poet George Sterling and fiction writer W. C. Morrow. Bierce employed a distinctive style of writing, especially in his stories. This style often embraces an abrupt beginning, dark imagery, vague references to time, limited descriptions, the theme of war, and impossible events. In 1913, Bierce traveled to Mexico to gain a first-hand perspective on that country's ongoing revolution. While traveling with rebel troops, the elderly writer disappeared without a trace. Since the book is a compilation of short stories, there is not an overarching plot. However, there are literary elements, or plot devices, that are shared throughout. Bierce's stories often begin mid-plot, with relevant details withheld until the end, where the dramatic resolution unfolds differently than expected, to a degree where most are considered twist endings. His characters were described by George Sterling as: "His heroes, or rather victims, are lonely men, passing to unpredictable dooms, and hearing, from inaccessible crypts of space, the voices of unseen malevolencies."... Bierce served as a union soldier during the Civil War and his experiences as a soldier served as an inspiration for his writing, particularly for the Soldiers section. In this way, Bierce's war treatments anticipate and parallel Ernest Hemingway's later arrival, whereas the civilian tales later influence horror writers. (Summary by Wikipedia and David Wales) (11 hr 11 min)

An Inhabitant of Carcosa

The Middle Toe Of The Right Foot

A Horseman In The Sky

An Occurrence At Owl Creek Bridge

A Son Of The Gods

One Of The Missing

The Affair At Coulter's Notch

An Affair Of Outposts

The Story Of A Conscience

One Kind Of Officer

One Officer, One Man

The Man Out Of The Nose

An Adventure At Brownville

A Watcher By The Dead

The Man And The Snake

A Lady From Red Horse

The Eyes Of The Panther

this reader is fantastic! if you are in to ghost stories you will like it. i am not a fan of those dark subjects so i stopped after several stories. but they are enthralling if thats your kind of thing.

I am really glad that I decided to listen to this book. It is very clever. Well worth the time needed to listen.

Some stories endings are mysterious to me. Interesting stories.

What a find!! Great introduction adds to the enjoyment.