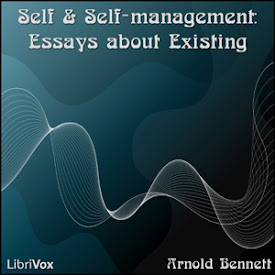 Self and Self-management: Essays about Existing

Bennett's essays always provide food for thought and bring a wry smile to the lips. Human nature, it appears, changes little over the ages, and Bennett, as always, stands the test of time, though in the case of some of the essays in this eclectic collection, it is well to remember that they were written at the time of the First World War and the fight for women's suffrage. (Summary by Ruth Golding) (1 hr 57 min)

1 Running Away from Life

4 A Dangerous Lecture to a Young Woman

6 The Meaning of Frocks

Ruth Golding gets it right again

Ruth Golding is perfect as always. The content itself is sometimes is a bit old fashioned in how it focuses negative attributes of character to women. It is definitely a mix of positive and negative, but there are times when the descriptions of women clearly come from a different era and one just starts rolling their eyes a bit. Hence, four and half stars instead of five.

Two stars for the reader, who does a wonderful job. When a self-proclaimed savant tells a disciple, while expounding on 'energy', "It's no use asking what I mean by the word 'energy'," we've left the realm of sense and entered Wonderland.

A piece which adheres slightly too strongly to its time

Arnold Bennett was an early writer on various subjects, best known now perhaps for stingingly public arguments with Virginia Woolf. In this book, he considers how to find work which is satisfying. His book is, in part, written to women doing war work, and seems to be an expression of his frustration about their complaints that the work is not personally rewarding. He’s an early exponent of the idea of psychological reframing. Not as good as some of his other books, and a little dated, but an interesting look at the mindset of war workers. It is very well read, though.

Excellent reader, an easy and thoroughly enjoyable book. It is full of wisdom and wit, apropos to not only it’s time but to the present time. Will definitely listen again.

Taken in context, with the importance of the time, and the benefit of 100+ years of hindsight, this is an engaging historical perspective and commentary.

A pleasant listen with useful ideas

The reading here was very good, and the content of the book is sure to help me going forward.

Odd essays, not what I expected from the title but uniquely well written.

Practical outlook on self improvement

On point and interesting information on self-improvement.