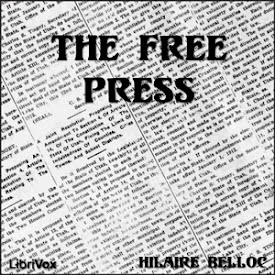 I propose to discuss in what follows the evil of the great modern Capitalist Press, its function in vitiating and misinforming opinion and in putting power into ignoble hands; its correction by the formation of small independent organs, and the probably increasing effect of these last. (Introduction by Hilaire Belloc) (1 hr 47 min)

An excellent criticism of capitalist press in the first half. The second half is primarily of historical interest, as the nature of "the free press" has been drastically altered since the Internet. The reader did a fine job and Belloc is a great author.

Things can only get better because they can't get much worse!

This longstanding problem has shifted into high gear when The Fairness Doctrine was removed by the FCC. Soon, the editorial page became the front page and objective truth became extinct! Phil Donahue and Chris Hedges were fired for exposing what is now generally agreed upon a rationale for war based upon a non-existent foundation of lies- The Iraq War! Now, a concerted effort to divide and conquer the American people with one side calling the other nazis and the other communists- when both parties are actually neoliberals bought by essentially the same money men! Also, the people are conned into believing "if only the reps" and "if only the dems" weren't in the way, the economy would right itself, great manufacturing jobs would return to America, and the streets would be paved with gold. Unfortunately, both parties split on relatively minor issues like abortion and gun control, meanwhile; taking bribes to enact legislation that has been, and is destroying the middle class!