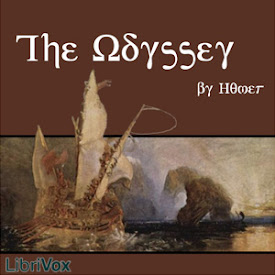 The Odyssey is one of the two major ancient Greek epic poems (the other being the Iliad), attributed to the poet Homer. The poem is commonly dated to between 800 and 600 BC. The poem is, in part, a sequel to the Iliad, and concerns the events that befall the Greek hero Odysseus in his long journey back to his native land Ithaca after the fall of Troy.

It takes Odysseus ten years to return to his native land of Ithaca after ten years of war; during his 20-year absence, his son Telemachus and his wife Penelope must deal with a group of unruly suitors who have moved into Odysseus' home to compete for Penelope's hand in marriage, since most have assumed that Odysseus has died.

The poem is a fundamental text in the Western canon and continues to be read in both Homeric Greek and translations around the world. (Summary from Wikipedia) (11 hr 18 min)

most of the narrators are good

I would give it 4 or more stars but one of the female narrators has a voice that is positively painful to listen to... a rough, cracked voice with poor inflection. No offense, just not a good narrator.

Most of the readers did a great job, except (and I mean no disrespect and am hugely thankful for the volunteers' time) Jemma Blythe sounds like she has bronchitis or something...somewhat painful to listen to. I was a little disappointed by the story, mostly just about a guy making terrible decisions and then blaming the repercussions on the 'gods'...still a classic and a must read though!

great story but man I have to agree with every one else about the one narrator's voice. it makes me want to rip my own ears off. but I am thankful for her volunteering but.... ouch.

I enjoyed listening to The Odyssey more than I have enjoyed a book since I read The Secret Garden or Tom Sawyer when I was in 4th & 5th grade. I have to admit there were tears in my eyes when Ulysses was reunited with his son...and I was even more moved when his wife finally embraced him! I love the different readers, with their accents and individual pronunciations of each word or name: it makes me feel like I am in a reading roof or a coffee shop passing around a good book for every person to read a chapter aloud. It's truly poetic. I listened to Myths and Legends of Ancient Greece and Rome on Librivox just before The Iliad & The Odyssey, which helped tremendously to sort out the Roman translations of the Greek gods and goddesses. It is also a very entertaining "read", so I recommend other Librivox listeners to do so as well. Well done Librivox volunteers!!! Thank you for making my hour-long drives into work well-spent. And thank you for bringing this story to life!

Great story. One of the classics but it was marred by a few of the readers, mainly Jemma Blythe. I spent more time trying to figure out what she was saying as opposed to actually paying attention to and engaging with the text. I'm sorry but I had to continue with another source because some of these readers were hard to follow.

Great piece of literature, I'd give full 5 stars if not the narrator of chapter 21 that maid those incredibly irritating voices of characters- some men sound like boys, some like mexican immigrants and other like pirates- I barely listened through it. Also, translation of name Uliseus instead of Odysseus, and Minerva instead of Athena are not so authentic.

The Odesy Review by Collin V.

this was a good book but it would have been nice if all of the chapters were red by one narrator rather than a different narrator for every chapter and that which ver narrator where chosen to read the whole book it would be nice if it were one of the better more clear readers.