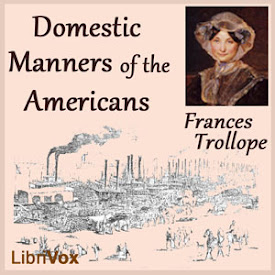 Domestic Manners of the Americans

Next to de Alexis de Tocquville's almost contemporary Democracy in America, Frances Trollope's work may be the most famous (or at least notorious) dissection of manners and morals of the United States. The work was a sensation on both sides of the Atlantic, and particularly in America, where Trollope was reviled as representing the worst of old world prejudices the new republic (though the criticism did nothing to hurt sales).

Accompanied by a son and two daughters, Trollope lived in the United States from 1827 to 1831, spending most of her time in Cincinnati, where she had hoped, when joined by her husband, to open a large department store, which was also to be a place of entertainment and culture. She was, unfortunately, almost entirely ignorant of business practices, and habitually short of money, which her husband was in no position to make up. After leaving Cincinnati she traveled briefly in the eastern states, before returning to England. There is something of a happy ending; Domestic Manners was her first book, and such a success that she turned to writing, producing in her lifetime over a hundred books, which, though they never made her very rich, were more than sufficient to keep the wolf from the door. She passed on her highly disciplined writing habits to her son Anthony (who had not accompanied her to the New World), who produced forty-seven novels as well as several other works. His views of the United States, thanks in part to its attractive young women, were, of course, more benign; indeed in The Duke's Children, the lovely New Yorker Isabel Boncassen is to become the Duchess of Omnium.

It's worth remembering that Frances Trollope's introduction to America was made through what was still something of frontier territory in Ohio, and few historians would argue that refinement and high culture were outstanding features of the Jacksonian era, which she saw first hand. Though some at the time feared that Domestic Manners would lead to a new Anglo-American war, fortunately the critical disputes took place on paper. Eventually passions cooled, and some Americans even came to admit that some of her judgements were just. Mark Twain, for instance, while chiding Trollope for falling for American tall tales (see the story of the crocodile's -- or alligator's -- destruction of a family in Chapter III), also remarked that the reason Domestic Manners was so hated by patriotic Americans was because it was so true.

In any case, it is offered by the reader as a contribution to the American political campaign of 2012.
Introduction by Nicholas Clifford) (11 hr 50 min)

domestic manners of the Americans

So enjoyed this book. Read Alexis de Tocqueville’s book some years back. Highly recommend both books. The narrator was excellent, as usual. Thank you, LibriVox!

This is the story of a British woman’s travels for three years in America about 1830. I enjoyed hearing about her thoughts. The reader was good.

A gem of a book. I found the opinions and attitude of the author refreshing. The reader is one of my favourites.

Exceptional reading of a magnificent book. What an exceptional woman Frances was. Her powers of kbservation and synthesis are simply marvellous. Highly recommended.

love the reader and the story. such interesting history of the US