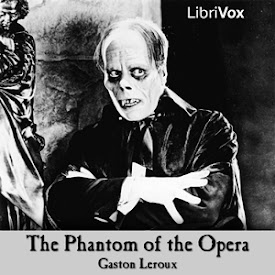 The Phantom of the Opera

An old theatre under new management; a diva who thinks she can sing; a young ingenue who really can; a masked man who wreaks havoc if he doesn't get his own way. Secrets, intrigues, falling chandeliers! The Phantom of the Opera is here! (Summary by Karen Savage) (9 hr 10 min)

Is It a Ghost?

A Visit to Box Five

Faust and What Followed

At the Masked Ball

Forget the Name of the Man's Voice

A Master-stroke of the Trap-Door Lover

The Singular Attitude of a Safety-Pin

The Commissary, the Viscount and the Persian

The Viscount and the Persian

In the Cellars of the Opera

In the Torture Chamber

The Scorpion or the Grasshopper: Which?

The End of the Ghost's Love Story

Epilogue and the Paris Opera House

This book is wonderfully narrated. Especially the first reader. The narration was mostly consistent throughout, and I recommend it to anyone who is interested in love stories that are rather different than most.

I’ve loved The Phantom of the Opera musical/movie(the 2004 version with Gerard Butler as Erik) since I was a pre-teen. I’ve always planned on reading the book, but somehow never found the time. I’m so glad I found the audio version or it might’ve taken me years to start the book, let alone even finish. The book is wonderful! There is so much detail, and surprisingly to me, a lot of humor in the characters. Gaston Leroux’s writing style is more modern than I expected, which was great because classical authors can sometimes be hard to follow just because the style is so antiquated. The version I listened to, each chapter was read by a different reader. All of the readers did a pretty good job; there were only a few that I didn’t like. The first version I tried to listen to was a dramatic reading. Wouldn’t recommend that one! The audio for the different voices ranged from alright, okay, and downright terrible. Also, in the dramatic reading version, whoever read the part of Erik/Phantom really rolled his R’s, to the point where I couldn’t understand what he was saying. I’m glad I found the second version or I might not have stuck with the story just because the reader in the first was so difficult to understand

Very different than what I expectec

I didn't know this story before listening. All narrators did a good job. usually I find it distracting when readers change, not so here. The story is darker than I expected and well written. Lots of surprises and mostly believable.

Excellent reading but a couple readers need to leave the voice acting and accent attempts at home and just read in their own voice. It goes way over the top toward the end

The last narrator was especially good, giving voice to the characters. I only wish the narration had been consistent.

Thanks to the volunteer readers. Sometimes less is more though...

Thank you for a good recording :)