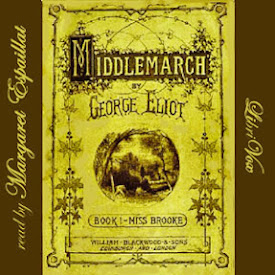 Middlemarch: A Study of Provincial Life is a novel by George Eliot, the pen name of Mary Anne Evans, later Marian Evans. It is her seventh novel, begun in 1869 and then put aside during the final illness of Thornton Lewes, the son of her companion George Henry Lewes. During the following year Eliot resumed work, fusing together several stories into a coherent whole, and during 1871–72 the novel appeared in serial form. The first one-volume edition was published in 1874, and attracted large sales. Subtitled "A Study of Provincial Life," the novel is set in the fictitious Midlands town of Middlemarch during the period 1830–32. It has multiple plots with a large cast of characters, and in addition to its distinct though interlocking narratives it pursues a number of underlying themes, including the status of women, the nature of marriage, idealism and self-interest, religion and hypocrisy, political reform, and education. The pace is leisurely, the tone is mildly didactic (with an authorial voice that occasionally bursts through the narrative), and the canvas is very broad. (Summary by Wikipedia) (35 hr 1 min)

Since librivox is volunteers, some of the readers aren't so great, but this one is good. The book itself...some of the most complex characters ever written into fiction.

Cannot praise reader enough. Thank you so much .

Enjoyed this so much ! What a gift at expression Eliot had ! Many thanks and much appreciation to the excellent and dedicated reader Margaret.

Absolutely exquisite writing and story. I look forward to another re -read.

Middlemarch is a great treasure of a book and so is this recording. Thank you so much.

Margaret Espaillat is one of the best readers

Middlemarch is so languorous, broad, dense i don't think i could listen more than ten chapters if a male read it. Silas Marner and Adam Bede are easier to listen to or read, at least for me. Im a little past half way point and i hope things start moving a little more dramatic. Eliot does have a tendency to use too many adjectives, presumably acting like an expert in human nature, and all her philosophical axioms. I've communicated with several authors and they all seem to conclude their characters almost have a mind of their own. but i suppose that is post modernism. I find Hardy does a better job of his characters directing there own thoughts and actions. i know it sounds a bit strange, but i have not the right words to describe it. Please, More female readers for Librivox!!! As i have commented before it seems there is a group of american males who dominate the reading of the latest recordings released for about a year or so. yes, i know, i know like most of us who listen to librivox could never afford to read or listen to books which are pay to listen. apologies if i've offended some american male readers. perhaps its just me, but it would be great to do a poll of librivox readers on who, what, where, how, etc they like about librivox. chapter 15 "i don't like husbands" comic dark humor chapter 14: proprietary quack medications, bleeding, etc vs albeit not advanced as today, legitimate medical practice. although today some herbals like echinacea, maitake mushroom, cannabis, and some others have been concluded to lesser and greater degrees, positive by scientific studies. up to chapter 67. the banker boulstrode(sp?)is really the most despicable, twisted, calvanist character. Raffles seems a nice man in comparison. save the decent good Garth family and Fred Vincy who love the daughter of decent Mr. Garth, and Will Ladislaw..... crikey! the rest of these characters need psychoanalyst ! what a bunch of screwballs, one of the root cause of their psychological morbidity being gossip and "for appearances sake". Dorethia's old curmudgeon "scholar" old husband dieing and making a nasty will, and her sister Celia is such a Pollyanna, airhead thus insensitive to those who need serious comforting. imho the Garth family and Will Ladislaw were my favorite characters and the most decent. as always thanks volunteers, librivox and Internet Archive. dahszil male usa

A love story or 2, amongst landed gentry

I really enjoyed the reading of this version of Middlemarch. The Reader Margaret Espaillat has a lovely voice and a range of believable character voices. At the start of each chapter there is a quote which supposedly sets the tone for the chapter. These come in a number of languages and Margaret adjusts the accent accordingly. I was very impressed. Now the story of landed gentry. Although 2 hundred years on it is still as fresh as if it had been written yesterday. The main character Dorothea goes from riches to rags in her persuit of love. This meets with disapproval from family and friends and lets George Elliott weave her character in a believable way. She is not always in frame as other stories are told of the contemporaries of the town. George Elliott was clearly a very well read author. I am grateful to her all these years into the future.

This wondrous novel hardly needs any recommendation from me, so I will simply offer my thanks to the reader who brought it to my ears! At first I thought her reading was a bit monotonous, but it got more varying after a while, and she does all the characters really well (particularly Mrs Cadwallader!). In the beginning, some of George Eliot's satire disappears a bit, and the reader's dulcet tones make even Mr Casaubon sound sympathetic! But on the whole, I think she does a fantastic job and I really love this audiobook. <3

Middlemarch is easily the best book I have listened to. Margaret is an excellent reader, flawless, with a very peasant voice and clear enunciation. The book is wonderful, perhaps as good as any over I ever read. Martin Amis and Julian Barnes both think it the best of all novels written in English. They said “best.” I guess I am getting a little giddy, perhaps gushing with praise, but I really enjoyed every moment of the book. Now I am reading Adam Bede, also ever so good. Call this five stars.