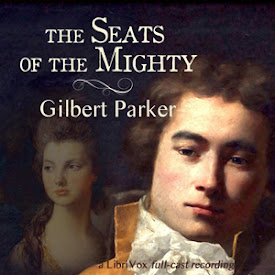 The Seats of The Mighty

For the time of his story Mr. Parker has chosen the most absorbing period of the romantic eighteenth-century history of Quebec. The curtain rises soon after General Braddock's defeat in Virginia, and the hero, a prisoner in Quebec, curiously entangled in the intrigues of La Pompadour, becomes a part of a strange history, full of adventure and the stress of peril, which culminates only after Wolfe's victory over Montcalm. The material offered by the life and history of old Quebec has never been utilized for the purposes of fiction with the command of plot and incident, the mastery of local color, and the splendid realization of dramatic situations shown in this distinguished and moving romance. The illustrations preserve the atmosphere of the text, for they present the famous buildings, gates, and battle grounds as they appeared at the time of the hero's imprisonment in Quebec. (Summary by D. Appleton and Company, 1896)

Loved the story. Tonnes of adventure & intrigue with a love story as a strong sub-plot. Unfortunately the main reader & others chose to put on very poorly done fake accents, & this was distractingly annoying. I do appreciate that it's a lot of work & time to make these recordings, but no one expects readers to have regional accents, so just let it be! At the same time, do please pronounce important words, like "Quebec" (Kwe-'bek, not " 'Kay-bek" correctly. Anyway, if you aren't bothered by this pet peeve of mine, you'll probably enjoy the recording very much.

Nice! Great job by all the actors, some may even want to consider going pro, not gonna say who but I bet you all know ;)

Thank you very much for posting this audiobook.