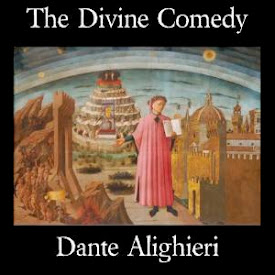 The Divine Comedy (Italian: Commedia, later christened "Divina" by Giovanni Boccaccio), written by Dante Alighieri between 1308 and his death in 1321, is widely considered the central epic poem of Italian literature, the last great work of literature of the Middle Ages and the first great work of the Renaissance. A culmination of the medieval world-view of the afterlife, it establishes the Tuscan dialect in which it is written as the Italian standard, and is seen as one of the greatest works of world literature. - The Divine Comedy is composed of three canticas (or "cantiche") — Inferno (Hell), Purgatorio (Purgatory), and Paradiso (Paradise) — composed each of 33 cantos (or "canti"). The very first canto serves as an introduction to the poem and is generally not considered to be part of the first cantica, bringing the total number of cantos to 100. - The poet tells in the first person his travel through the three realms of the dead, lasting during the Easter Triduum in the spring of 1300. (Summary from Wikipedia) (12 hr 23 min)

I'd rather be blind

Those reviewers who complain about the readers need to look in the mirror. READ IT YOURSELF. I am blind, and poor as a result of the blindness. I appreciate every volunteer who reads for Librivox. I am intelligent enough to accept their efforts. You reviewers who criticize these marvelous readers, go to Audible where it costs $14.95/ month and leave us alone. I'd rather be blind than stupid. These volunteers are wonderful!

one of the greatest works of human history

how many times I have listened to this all the way through or in sections? innumerable. thanks to all the readers. I especially enjoy the reader of the first contos of Purgatorio.

One of my favorites. Thank you to all the volunteers who took time to read this aloud for everyone.

The woman reading the last of the Inferno recordings is enfrutiating to listen to. She uses weird inflections and I can't even understand what she's saying.

A tough text to read, hear and understand. Most readers were good enough individually but the wide range of voices and styles breaks listeners continuity.

Inferno was the easiest to follow. The book was beautiful to listen to. As other reviewers wrote, some readers are better than others, and there were a number of mispronunciations, but I applaud and thank all the volunteers who give their time and try their best to bring this spiritual journey to life. I will need to give the Divine Comedy several more listens to absorb a little more of the complexity of Dante’s words with each listen.

The Purgatorio Version of the Comedy: Many readers with many levels of heavenish to hellish degrees of quality await you in this community recording. Some of Librivox's best talent are here, along with truly cringe-worthy performances. If Librivox had only thought to have their better (or in the case of a classic like this, their best) talent read a section each-- one inferno, another purgatorio, and another paradiso.