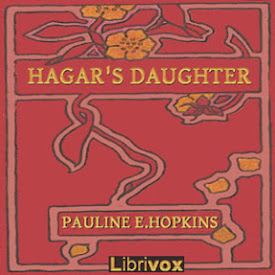 Hagar's Daughter was first published serially in "The Colored American Magazine" in 1901-1902 by Pauline E. Hopkins, a prominent African-American novelist, journalist, historian, and playwright. The book was described as "a powerful narrative of love and intrigue, founded on events which happened in the exciting times immediately following the assassination of President Lincoln: a story of the Republic in the power of Southern caste prejudice toward the Negro." (From the January, 1901, issue of "The Colored American Magazine")

In another of her works, the author explained the nature and purpose of her literary efforts: "But, after all, it is the simple, homely tale, unassumingly told, which cements the bond of brotherhood among all classes and all complexions. Fiction is of great value to any people as a preserver of manners and customs—religious, political and social. It is a record of growth and development from generation to generation. No one will do this for us; we must ourselves develop the men and women who will faithfully portray the inmost thoughts and feelings of the Negro with all the fire and romance which lie dormant in our history, and, as yet, unrecognized by writers of the Anglo-Saxon race." (From the Preface, Contending Forces, 1900) (Summary by lubee930) (8 hr 38 min)

Melodrama With A Moral

The bulk of this tale is a good old fashioned melodrama of the 19th century sort, with hiss-able villains, sweet heroines, passionate bad girlsand a hero with a stalwart heart, but an IQ well south of 100. It makes for a fun listen. Because the author rather too obviously stacks the deck, it's too easy to guess the mystery at the core of the book, but that really is not a problem. The problem here is the ending, and the plot contrivances used to get to that ending. That end does fit the general theme of the book, but requires a number of characters to act vigorously against their best interests. The readers do a good job on this story.

Enlightening. A period of history I had no idea about. Great reading, thanks.

I really enjoyed this book 📚