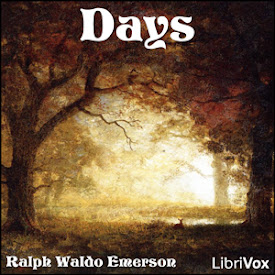 LibriVox volunteers bring you 17 recordings of Days by Ralph Waldo Emerson. This was the Weekly Poetry project for June 10, 2012.

As a lecturer and orator, Emerson—nicknamed the Concord Sage—became the leading voice of intellectual culture in the United States. Herman Melville, who had met Emerson in 1849, originally thought he had "a defect in the region of the heart" and a "self-conceit so intensely intellectual that at first one hesitates to call it by its right name", though he later admitted Emerson was "a great man". Theodore Parker, a minister and Transcendentalist, noted Emerson's ability to influence and inspire others: "the brilliant genius of Emerson rose in the winter nights, and hung over Boston, drawing the eyes of ingenuous young people to look up to that great new start, a beauty and a mystery, which charmed for the moment, while it gave also perennial inspiration, as it led them forward along new paths, and towards new hopes". ( Summary from Wikipedia ) (0 hr 17 min)