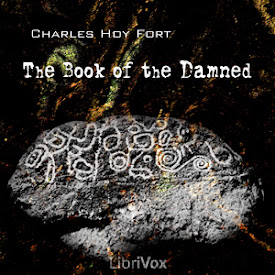 Book of the Damned

The Book of the Damned was the first published nonfiction work of the author Charles Fort (first edition 1919). Dealing with various types of anomalous phenomena including UFOs, strange falls of both organic and inorganic materials from the sky, odd weather patterns, the possible existence of creatures generally held to be mythological, disappearances of people under strange circumstances, and many other phenomena, the book is historically considered to be the first written in the specific field of anomalistics. - Summary from Wikipedia (14 hr 27 min)

Ttruth doesn't need a good review. hundreds of eye witness accounts quoted directly from the original and well respected scientific journals. These well documented historical events should be common knowledge. Truth is stranger than fiction. Those poor reviews must been posted by Smithsonian employees

Not written all that well. Subjects are interesting, of course, but I'm of the opinion that if aliens can fly to Earth, the SAME TYPE OF ALIENS wouldn't need to abduct and experiment on so many different humans. I mean, we are all pretty much the same, for experimental purposes. I am fairly sure aliens exist (Though probably cellular and non-humanoid, unlike popular depictions such as Star Trek / Star Wars), but there are just so many fake accounts written by con artists that I haven't found an actual story that I can believe. All I can say is that I believe in the concept, but don't think that the individual would even notice Earth, and if they did, why would they bother with such an idiotic species? I mean, we just bungled our COVID-19 response so badly that almost uncountable people died. We've done things like that pretty commonly in the past, too... if an alien race has the tech for interstellar travel, why would they bother with such a technologically troubled species?

A review of “anomalous phenomena” bogged down by community college level philosophy and the author’s narcissistic and bloviating tendencies. Disappointing.