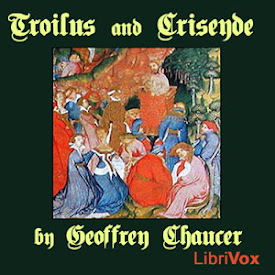 Troilus and Criseyde is a poem by Geoffrey Chaucer which re-tells in Middle English the tragic story of the lovers Troilus and Criseyde set against a backdrop of war in the Siege of Troy. It was composed using rime royale and probably completed during the mid 1380s. Many Chaucer scholars regard it as the poet's finest work. As a finished long poem it is certainly more self-contained than the better known but ultimately uncompleted Canterbury Tales. Criseyde, the daughter of the seer Calchas, lives alone in Troy after her father abandons the Trojans to help the Greeks. Eventually she catches the eye of Troilus, a man who had previously scoffed at love, and becomes the object of his overwhelming desire. With the help of Criseyde’s uncle Pandarus he wins her love but soon loses it when the Greeks and the Trojans conduct an exchange of prisoners. Calchas, who knows of Troy’s imminent destruction, persuades the Greeks to exchange Antenor for his daughter and thus saves her from the doomed city. Criseyde promises Troilus that she’ll return to him after ten days but once she’s back in the care of her father she realizes the impossibility of her promise. Resigned to her fate, Criseyde yields to the flirtations of Diomedes, and her love for Troilus fades. When Deiphobus wins the armor of Diomedes, Troilus discovers a brooch he gave Criseyde upon her departure pinned to it. Heartbroken, he tries to find Diomedes and take his revenge during battle but after slaying many is in his turn killed by Achilles. As his spirit goes to heaven he reflects on the absurdity of all life itself. (Summary by Wikipedia) (7 hr 47 min)

Middle English as it probably sounded. Well done. Personally, I believe it is best to give vowels modern pronunciation for wide audiencrs, but specialists will appreciate