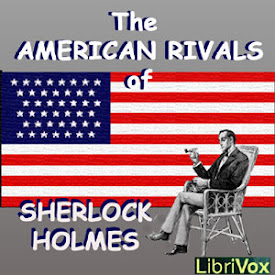 The American Rivals of Sherlock Holmes

To follow up on the heels of volumes 1 and 2 of "The Rivals of Sherlock Holmes" released on LibriVox, here is a collection of stories starring his contemporary American rivals. Brought together and re-published in a single volume by Hugh Greene in 1979, this set of readings goes back to and uses the original source material. (Summary by ToddHW) (12 hr 24 min)

The Man Higher Up

The Man Higher Up, part 2

The Man Who Spoke Latin

The Affair of Lamson's Cook

This is one of the poorer compilations I have listened to. Some of the accents are too strong so that you can't really follow the story, and some of the recordings are so poor you can't follow the story (mic too close). Some are great tho, so it's still worth a listen, just be warned.

these 3 volumes contained some interesting stories and plots, ruined by narrator's who can't read, with accents so thick you couldn't understand them, reading way too fast and trying to read parts meant for the other sex. they need to get there qa people on the ball!

A few of the stories are interesting, but only the last one was clever. one exception was the one about Godahl. He might be a rival of Moriarty, but not Holmes.

Could not get into stories at all. Did not finish book ,just was not for me. First book I failed to finish, readers were ok, it was selections I could not relate to.

Some interesting plots & characters, all were narrated (some recorded very low and / or too softly) but most were enjoyable enough for a first reading. I would not re-listen, however.

This collection has some interesting stories ("Found Guilty" was great), but the readings were very uneven. It is listenable, but not great.

the voice is difficult