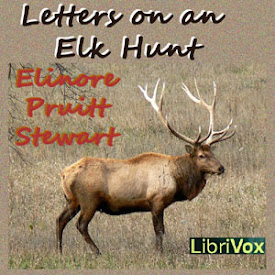 Letters on an Elk Hunt

This is a sequel to Letters of a Woman Homesteader in which Elinore Rupert (Pruitt) Stewart describes her arrival and early years on a Burntfork Wyoming ranch in 1909-1913. The letters are written to her elderly friend, Mrs. Coney, in Denver. In the present collection of letters, Elinore describes a lively excursion on horseback and wagon into the Wyoming wilderness during July-October 1914. Her traveling companions are her husband “Mr. Stewart,” their three oldest children, and kind-hearted, opinionated neighbor Mrs. O’Shaughnessy. Mr. Haynes (organizer of the hunt) and his friend, Mr. Struble (the cheerful big man of the party) lead the group, and are also joined by physician Dr. Teschall, “a moving-picture man” Mr. Harkrudder, Professor Glenholdt seeking “the tip-end bone of the tail of a brontosaurus” and his students (“two geological fellows” who “talk of nothing but strata and formation”). Also joining the group is Mr. Murry with his tiresome accordion.

Although some hunting is accomplished on the trip, the overarching focus of Elinore’s letters is on descriptions of awe-inspiring Wyoming scenery and the interesting people she encounters. With her familiar wit and wisdom, Elinore also writes of tragedies and romances she observes during her trip -- that is, whenever Elinore’s effort to observe is not thwarted by “the good mon” Mr. Stewart. In one letter Elinore complains to Mrs. Coney that “Mr. Stewart is the queerest man: instead of letting me enjoy the tableau [the reunion of two long-lost lovers], he solemnly drove on, saying he would not want any one gawking at him if he were the happy man. Anyway, he couldn’t urge Chub [the horse] fast enough to prevent my seeing and hearing what I’ve told you.”

By the time the adventurers are homeward bound with their supply of elk meat, Elinore is homesick for her youngest child, Junior, at home with his grandmother; Mrs. O’Shaughnessy has taken in two young orphans; and quiet, young Mr. Haynes complains good-naturedly about having to travel along with a rolling nursery.

Elinore’s letters capture an interesting transition point in history. People traveled by horse and wagon, there were cowboys and cattle stampedes, and medical care was rustic. At the same time, automobiles and modern medicine, archeology and motion picture making were entering the scene and war was commencing in Europe. (Note to more sensitive readers: Elk hunting is described in Chapters 7 and 8.) (Summary by Lynne Carroll) (3 hr 3 min)

I found this book very inspirational and moving story. Showing the hardships and faith of many people in a era long ago. Very well read and a good book. Thanks to LibriVox for another great book along with Lynne Carroll & Sherri Vance great jobs of narratoring.

I really enjoyed this story. It was interesting to hear of all the people Elinor met on the elk hunt and all of the little adventures they had. Excellent narration!

Really enjoyed this book, interesting look into life as it was in the early 1900s. Well written and well read.

Letters on an Elk Hunt