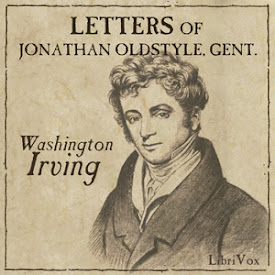 The Letters of Jonathan Oldstyle, Gent. (1824) is a compilation of eight humorous and observational letters written by American writer, Washington Irving, under the pseudonym, Jonathan Oldstyle. These eight letters and one additional were first published as a series of "Letters to the Editor" of the New York paper, The Morning Chronicle, between 1802 and 1803. In them Oldstyle skewered the local New York social scene on the topics of etiquette, marriage, fashion, and other particulars of human interaction.

Most of Oldstyle's observations took place in the theatre, but really had less to do with that venue and more to do with an analysis of men and women acting out their own particular roles in life. At times this letter-writing Oldstyle had a bit of help from his good friend, the inimitable Andrew Quoz (another of Irving's personae). Together they subverted the status quo of theatre criticism in New York, and placed social behavior in the limelight, figuratively speaking. These letters were Irving's first foray into published writing; he was 19 at the time. He would later pen Rip Van Winkle and The Legend of Sleepy Hollow. (Summary by James K. White, Gent.) (1 hr 38 min)

Good particularly for those into community theatre

Washington Irving — the Sleepy Hollow guy — wrote a series of observational letters to a newspaper. The early ones were about contemporary marriage, the middle series criticized the behavior of people performing and viewing theater, and the final one was about dueling. They are lovely little pieces, particularly the section about community performance, much of which is still relevant today