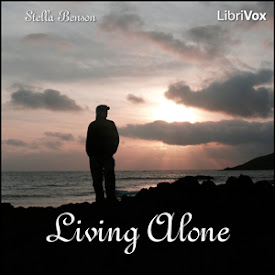 This is not a real book. It does not deal with real people, nor should it be read by real people. But there are in the world so many real books already written for the benefit of real people, and there are still so many to be written, that I cannot believe that a little alien book such as this, written for the magically-inclined minority, can be considered too assertive a trespasser. -- Stella Benson (author)

Published in 1919, and set in London during the First World War, Living Alone tells of the meeting of a recluse and a witch, then rambles through magic, morality and aerial dogfights on broomsticks. There isn't too much in the way of a plot, but with its curious blend of fantasy and practical detail of a country in war-time, it's a charmingly weird novel that I hope will entertain witches, wizards and muggles alike. -- Cori Samuel (narrator) (4 hr 21 min)

1 - Magic Comes to a Committee

2 - The Committee Comes to Magic

5 - An Air Raid Seen From Below

6 - An Air Raid Seen From Above

9 - The House of Living Alone Moves Away

Whimsical and enjoyable enough but I doubt I will recall much about this book in 3 month's time due to its inconsequentialness. I may be doing it a disservice; others may get more out of it. Excellent narration.

This is a gem of a book, brilliantly read.