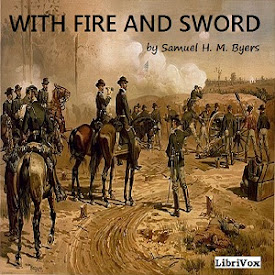 With Fire and Sword (Byers)

Samuel H. M. Byers was an American poet, diplomat, and soldier in the Civil War. "In war some persons seek adventures; others have them in spite of themselves. It happened that the writer of this book belonged to a regiment that seemed to be always in the midst of great experiences. It was, in fact, one of the few regiments that absolutely fought themselves out of existence. It was mustered in a thousand strong; it lost seven hundred and seventy-seven men by death, wounds, and disease. The fragment that was left over was transferred to a cavalry command. When the writer finally escaped from prison, after many months of confinement and many thrilling adventures both in prison and in the army of the enemy, he was mustered out as a "supernumerary officer." His command had ceased to exist. He was literally the last man of the regiment.

He kept a diary every day in the four years of war and adventure. The substance of the facts related here is from its pages; occasionally they are copied just as they are there set down. The book is not a history of great army movements, it is simply a true tale of the thrilling experiences of a subordinate soldier in the midst of great events." (Summary from the Preface) (4 hr 41 min)

wow...a lot of surprises and a great glimpse at a soldiers experience.