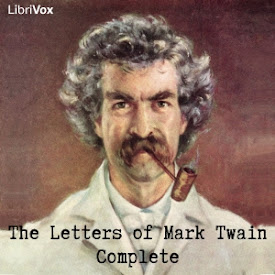 The Letters of Mark Twain, Complete

These letters were arranged in two volumes by Albert Bigelow Paine, Samuel L. Clemens's literary executor, as a supplement to Mark Twain, A Biography, which Paine wrote. They are, for the most part, every letter written by Clemens known to exist at the time of their publication in 1917. They begin with a fragment of a letter from teenaged Sam Clemens to his sister, Pamela, and conclude with a letter to his attorney two weeks before his death.

These letters give us some degree of insight into the evolution of Twain's style of speech and prose over the period of his lifetime; they are a small window into the psyche that created the various characters of his stories.

But they also reveal the tragedies of his life: the lack of success in his business ventures, the passing of family. And as I read each one in this collection, I can almost detect the faint odor of one of his “devilish” cigars wafting across the room. (Introduction by James K. White) (32 hr 45 min)

One has to admire James K. White for taking on such an immense project. His speaking voice is quite good, but he just doesn't pull off the Mark Twain impersonation. He sounds much more like a black man than anything resembling what I imagine Twain sounding like. In my opinion, it would have been better to just read the letters in his own voice rather than attempt a task that is beyond his ability.

Reading this collection was a labor of love for me, and the "brogue" I used served to honor Twain's memory, not to imitate his voice. No one can imitate Twain's voice because no one knows what he sounded like. But I suppose there will always be know-it-alls like Mr. Miller who find it a daunting task indeed to refrain from cluelessly pontificating on subjects they know nothing about.

Listening to James White makes you believe you're listening to Mark Twain and it's a wonderful ride . Thank you James

Thank you to the reader James K. White for bringing Mark Twain to life ... Excellent

Thoroughly enjoyed listening to this entertaining funny interesting LOVED IT !!

This book is wonderfully read, and very enjoyable