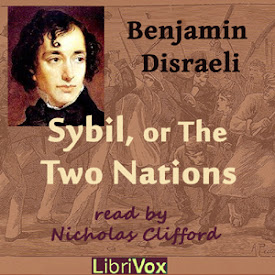 Sybil, or the Two Nations

Sybil is one of the most prominent political novels of the mid-nineteenth century, taking as its subject the "condition of England" question. That phrase was first used by Thomas Carlyle in an essay of 1839 on Chartism, a working-class protest movement that plays a prominent role in this novel. The two nations are the rich and the poor, and the increasing gulf between them, and their condition also inspired such writers as Charles Dickens and Mrs. Gaskell, among others (one of whom, Friederich Engels, was the disciple of Karl Marx, and in his The Condition of the Working Class in England in 1844 described the appalling effects of the industrial revolution a year before Sybil appeared). (16 hr 50 min)

Book I, Chapter i

This book is a mediocre one and no more than a historical curiosity. I did however enjoy listening to the reader of the book. He has a pleasant voice, the sound quality was good and his reading was better or equal to professional quality books. Thank you.