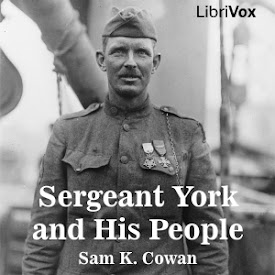 Sergeant York and His People

From a cabin back in the mountains of Tennessee, forty-eight miles from the railroad, a young man went to the World War. He was untutored in the ways of the world. Caught by the enemy in the cove of a hill in the Forest of Argonne, he did not run; but sank into the bushes and single-handed fought a battalion of German machine gunners until he made them come down that hill to him with their hands in air. There were one hundred and thirty-two of them left, and he marched them, prisoners, into the American line. Marshal Foch, in decorating him, said, "What you did was the greatest thing accomplished by any private soldier of all of the armies of Europe." His ancestors were cane-cutters and Indian fighters. Their lives were rich in the romance of adventure. They were men of strong hate and gentle love. His people have lived in the simplicity of the pioneer. This is not a war-story, but the tale of the making of a man. His ancestors were able to leave him but one legacy—an idea of American manhood. In the period that has elapsed since he came down from the mountains he has done three things—and any one of them would have marked him for distinction. (Summary by Sam Cowan) (3 hr 29 min)

01-A Fight in the Forest of the Argonne

02-A "Long Hunter" Comes to the Valley

03-The People of the Mountains

05-The People of Pall Mall

Alvin York is a largely forgotten American hero of WWI. This native of rural Tennessee singlehandedly captured a company of enemy soldiers and became a national symbol of the upright rural character. I suggest that listeners try to get over the author's hyperbole, which is sometimes a bit much. Whatever else he was, York appears to have been an honourable man who refused to capitalise on his fame. Brett Downey, the narrator, does a capital job. His overly amplified delivery puts me in mind of the strident voice-over actors of early newsreels -- quite appropriate for the material. Thank you Brett! TheBookworm (Manchester, UK)

The reader has a good clear voice and sounds like he is genuinely interested in the subject. The story of Sergeant York life and that of his ancestors is absolutely amazing.

The first chapter is gripping and is a must-read for every American! The story is astonishing today as it was 100 years ago, which is why York was widely (and deservedly) lauded as a hero. The rest of the book examines how a hero so brave, so skillful, so patriotic, and so humble was made, and it makes the case that these attributes of York were very much influenced by his environment. Some of our nation’s greatest warriors were brought up in Tennessee.

I didn't finish reading the introduction so was expecting a war book, especially when the first chapter is so brilliant. but i was wrong, but in the end it really didn't matter as it turned out to be an interesting and lovely story. Just a shame he didn't make the movie I think it would have been great.

Who could only capture those Jerries by standing in the back of oppressed BIPOC LatinX Americans. Never forget Tennessee, the land of his birth was first owned by Native Americans. This incredibly Albocentric story ignored the contributions of LatinX Americans during the Great War

Excellent Book . A Must Read . Special thanks to the reader he did an excellent job