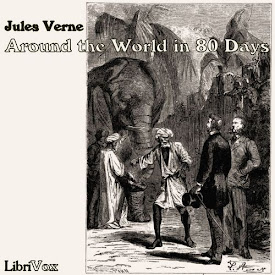 Around the World in Eighty Days

Around the World in Eighty Days (French: Le tour du monde en quatre-vingts jours) is a classic adventure novel by the French writer Jules Verne, first published in 1873. In the story, Phileas Fogg of London and his newly-employed French valet Passepartout attempt to circumnavigate the world in 80 days on a £20,000 wager set by his friends at the Reform Club. (Summary from Wikipedia) (8 hr 48 min)

In Which Phileas Fogg and Passepartout Accept Each Other, the One as Master, th…

In Which Phileas Fogg Astounds Passepartout

In Which a New Security Appears on the London Exchange

In Which Fix, the Detective, Betrays a Very Natural Impatience

In Which Passepartout Talks Rather More, Perhaps, than Is Prudent

In Which Phileas Fogg and His Companions Venture across the Indian Forests, and…

Showing What Happened on the Voyage from Singapore to Hong Kong

In Which Phileas Fogg, Passepartout and Fix Go Each about His Business

In Which Passepartout Takes a Too Great Interest in His Master, and What Comes …

In Which Fix Comes Face to Face with Phileas Fogg

In Which Passepartout Finds Out That, Even at the Antipodes, It Is Convenient t…

During Which Mr. Fogg and Party Cross the Pacific Ocean

In Which a Slight Glimpse Is Had of San Francisco

In Which Phileas Fogg and Party Travel by the Pacific Railroad

In Which Passepartout Undergoes, at a Speed of Twenty Miles an Hour, a Course o…

In Which Phileas Fogg Simply Does His Duty

Fix the Detective Considerably Furthers the Interests of Phileas Fogg

In Which Phileas Fogg Shows Himself Equal to the Occasion

In Which Phileas Fogg at Last Reaches London

Rarely am I critical of anything, especially when it's obvious the work was not only free, but submitted by someone who sounds like a young person that is still getting their feet wet. I really appreciated the reader's desire to contribute. Perhaps this particular individual has ambitions of a future career in voice work or professional narration. While I believe that anyone can accomplish what they want with practice and determination, this is obviously a review of the reader himself, but their work in its current state, and not an endorsement or criticism of the individual. The book is fantastic, while the narration is, quite unfortunately, not so. The reader does not main a constant pace, stumbles on words, and mispronounces names and locations. Additionally, there's a lack of enunciation that can only comes from either years of practice, professional coaching, or both. The version by Mark F. Smith, titled version 2, is vastly superior in quality, but then again, Mr. Smith is a professional with dozens of works both copyrighted and in the public domain.

Librivox contains many fine readings, unfortunately this version of the Jules Verne classic was far too variable in reading quality for me to enjoy. Though the reader does put some acting verve into his dialogue, he stumbles over other words as if still learning them. It is not too much to ask that readers practice 'difficult' words before committing them to a public collection. Fortunately, another version of this book is under production, having listened to initial episodes I would recommend waiting for this coming version.

Warning! This is not the version you want to listen to!

Avoid this version at all costs. the reader makes this version unlistenable. Seek out Mark Smith's version elsewhere on the Librivox archive, if you want to hear the book without throwing your speakers across the rooms in aggravation. I could say a great deal more, but I don't want to venture into hurting anyone's feelings.

I quite liked this.

I suppose it was mostly shock at how different the book is to the later versions I've seen, but I thought this was a great deal of fun, and I didn't share the previous poster's objections to the reader.

If serious, this is a failure on many levels and the reader disrespects the listener. If satire, there are many laughs to be heard.

Interesting, but the reader would benefit from reading the book before recording it.