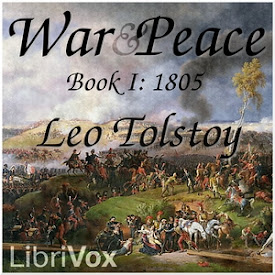 War and Peace offered a new kind of fiction, with a great many characters caught up in a plot that covered nothing less than the grand subjects indicated by the title, combined with the equally large topics of youth, age and marriage. While today it is considered a novel, it broke so many novelistic conventions of its day that many critics of Tolstoy's time did not consider it as such. Tolstoy himself considered Anna Karenina (1878) to be his first attempt at a novel in the European sense. (Summary by Wikipedia)

Goodness. I can't imagine reading War and Peace as a solo project. The general rule of thumb is that it takes 3-4 hours work to produce one hour of recorded audio, depending on the complexity of the voicing and the difficulty of the text you are reading. Without group readings, projects like this would never get off the ground. In my view, it is better to have a group recording with all its faults and foibles than no recording at all.

This book is so epic and so worth listening too! It is layered, it is heartfelt, it is beautiful, it is cold and analytic, and it is the most riveting writing about battle that I have read and there are many good books on the topic. As for the people who complain about the readers, I doubt many of them made it past the first book. Once you've listened for a while the readers becomes familiar and I welcomed them like old friends. There were very few that were difficult to listen to and only two or three chapters in the whole 17 book recording that were unlistenable. This is such every rewarding read. I highly recommend it! Many thanks to all the readers for the hours and hours of hard work you put in to make this possible!

war and peace, the entire novel

This is a wonderful collaboration of volunteers that read this book, with the exception of one reader. If someone would re-read her parts it would simply be amazing! If I hadn't had really wanted to finish the book I couldn't have made it. as it is I honestly can't recommend someone listening. one thing you should do before deciding to listen is go find a chapter or two read by Eva and if you can handle it go for it! She does get a little better towards the end. there are some awesome readers involved as well! If you listen I wish you luck!

Many of the novels and other full-length books at LibriVox are read as "group projects", and it is our practice not to refuse anyone who wants to read. Personally, I've found most of the group efforts I've heard to be at least acceptable, if not outstanding (like a group recording of Marcus Aurelius' _Meditations_ that I enjoyed very much). Nevertheless, if you're unhappy with the way this book was recorded, you can either volunteer to re-record it yourself as a solo work, or you can contribute re-recorded versions of chapters that you're unhappy with. At LibriVox, we're very much about "choice of voice". All that's required are a microphone and signing up at the forum. Also note that with newer versions, we try to standardize the volume levels. Older works may occasionally be recorded at low levels, and this is equally a problem for solo recordings (like Carl Manchester's otherwise superb recording of Bakunin's _God and the State_).

Unfortunately, multiple people have contributed to reading this novel and there are problems with this for me. First, there is not enough attention being given by some to the recording level so some of their uploads are so low, my iPod is not able to reproduce the audio at an acceptable level. The bigger issue is that some of these well meaning folks have heavy accents, or pause too much, or try acting a bit too much, and I'm having trouble concentrating on the content. I'm sure this format would work fine if any one of these people would read the whole Novel, talented as they all are, but because you have so many different readers (one for EACH CHAPTER before I had to give it up) there's something missing. Sorry for the bad review, but this was my experience. I had to stop near the end of the first book. I must say that my other Librivox/Archive.org audio books have been outstanding.

I was just listening to Atlas Shrugged which is a Librivox recording and a very long book. I think its just 60 pages shy of War and Peace. It was read entirely by Christopher Hurt. Chapters 15 - 17 (War and Peace) are read by a woman with the worst "motherese" baby talk I've ever heard. She refuses to use contractions of any words and exaggerates syllables to the point of self parody. The following reader (chapter 18) is a British woman who sounds like she is on a life support system slurring words as she clings to dear life. I'm disappointed that such a great book is given this treatment while Atlas Shrugged is read coherently (given the insanity of Atlas Shrugged). I'm enjoying War and Peace and of course I am thankful that people have donated their time. As an earlier reviewer noted, I also find it annoying when a reader tries to act too much. Maybe Librivox has a system of grading readers so they receive feedback? I am at chapter 18 in the first book and will most likely listen to the whole book, but I wish there was one reader per book at least or just one reader for the whole work. To further "look the gift horse in the mouth" I wish IA would arrange these books in groups instead of having to go searching for the books one by one. I just bought a condenser mic and will be reading for Librivox soon, if they accept me. I think its a wonderful group and have enjoyed what I have listened to so far.

How can anyone complain about a free audiobooks, et al, service

When I first discovered librivox and Internet archive I was overly critical. But having a conscience and little money, I am grateful for librivox and IA. There is one thing which is advantageous to a collaborative; it is that you will not become stuck with a recording quality or voice that one does not subjectively care for the whole volume or book. There is a part "Volume 1" version which includes probably books one and two, and perhaps the first part of book 3. It is a solo voice of, in my opinion, is a fine reader Mary Ann Spiegel. It is peppered with many French phrases and sentences, not translated into english. This war and peace translation, Book 1, is almost totally in English, for we mere "earthlings". :-)

To begin with, this isn't the kind of book I'm typically interested in. It's one of those classics that people say you have to read before you die, so I thought I'd give it a try. The story is a little hard to follow, there are a lot of characters with several names each, and it's a little boring. None of that would usually bother me much because I recognize that this is part one of fifteen (seventeen counting the epilogues), and things are bound to get better. That being said, my biggest complaint is with the narrators. Different accents, different pronunciations, different volumes, different speeds and rhythms and all of that throw me off every time a new chapter starts. I swear the woman from chapter 18 must have been slowly dying while recording. That's commitment.