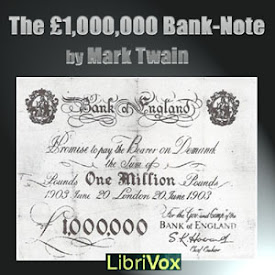 -The £1,000,000 Bank-Note
-Mental Telegraphy
-A Cure for the Blues
-The Enemy Conquered; or, Love Triumphant
-About all Kinds of Ships
-Playing Courier
-The German Chicago
-A Petition to the Queen of England
-A Majestic Literary Fossil

This Mark Twain short story collection was published in 1893, in a disastrous decade for the United States, a time marked by doubt and waning optimism, rapid immigration, labor problems, and the rise of political violence and social protest.

It was also a difficult time for Twain personally, as he was forced into bankruptcy and devastated by the death of his favorite daughter, Suzy. Yet the title story still brims with confidence and optimism, marking the moment of hope just before Twain turned to the grim stories of his later years. (Introduction by Wikipedia) (7 hr 10 min)

A Cure for the Blues

The Enemy Conquered; or, Love Triumphant- Part One

About all Kinds of Ships

A Petition to the Queen of England