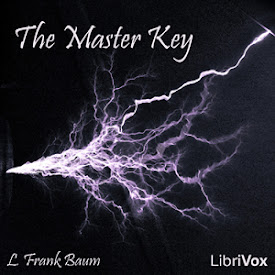 The Master Key was one of Baum's earliest full length fantasy books for children, published in 1901 just one year after The Wonderful Wizard of Oz. The protagonist, Rob, while experimenting in his workshop, accidentally summons up an electrical fairy who presents him with electrical devices so advanced as to seem magical. His gifts include a flying contraption, a stun gun, and something resembling an omniscient portable TV set. Rob travels the world, rendering assistance to European heads of state and narrowly escaping disaster at the hands of “primitive” cannibals, Turks and Tatars, pirates, and evil scientists who try to steal his inventions. It's great fun, despite the occasional use of racial stereotypes that reflect the values of its time. (3 hr 40 min)

02 - The Demon of Electricity

15 - A Battle with Monsters

20 - The Unhappy Fate of the Demon

I absoulutly love it. i love l frank baum. i love oz so i probably will like this book. suposed to be for boys but i love all books. girl or boy.

Great! One of L. Frank Baum's best books, the reader and story were great. I highly recomend this for Oz book fans and fantasy story fans!

it was a fun book great for the young

This is for two year annoying young people

Having read much of Baum's other work, I was a little disappointed in this book. The protagonist is far less sympathetic than Baum's other child heroes. He lacks common sense, and his bumbling seems to satirize society's inability to use technology wisely. The racist stereotypes are vicious (and too pervasive to be easily edited out). If you enjoy children's literature of this time and can stomach the racism, you might get more out of the book than I did, but in general I wouldn't recommend it for children. The recording quality is fine. I found the reading a little stiff, but clear.